About the search for the right way

The CADUS Emergency Response in the Ukraine War

First we hoped: it won't start. Then we thought: maybe it won't take long. Now the hundredth day of Russia's war of aggression on Ukraine has passed, and there is no end in sight.

CADUS is on the ground with two ambulances, coordinating medical evacuations across the border with up to 5 organizations and 50 emergency vehicles. Why we were given this task, how the underlying humanitarian structures work, and why an answer to the question "what next" is not so simple, these are the questions dealt with in the following lines.

Imagine you were working in humanitarian aid, and a war broke out next to you....

On February 24, 2022, Russia attacked Ukraine, and from then on our phones never stopped ringing. We talked to various possible cooperation partners to identify the most appropriate way to provide aid. It was not an easy task to classify all the requests we received and to decide in which direction to proceed. "CADUS, you have been active in war zones, or you still are, you know how to deal with such a situation...?"

In fact, so far we have stayed clear of war operations where the airspace is not closed and there is a constant threat of missile strikes. And with regard to many other aspects, our operations in Iraq and northeastern Syria cannot be compared with the situation in Ukraine. Until now, we have not had any long-term cooperation, and we have not been able to ask our partners on the ground: What do you need? How can we support you so that you can better cope with the current situation? 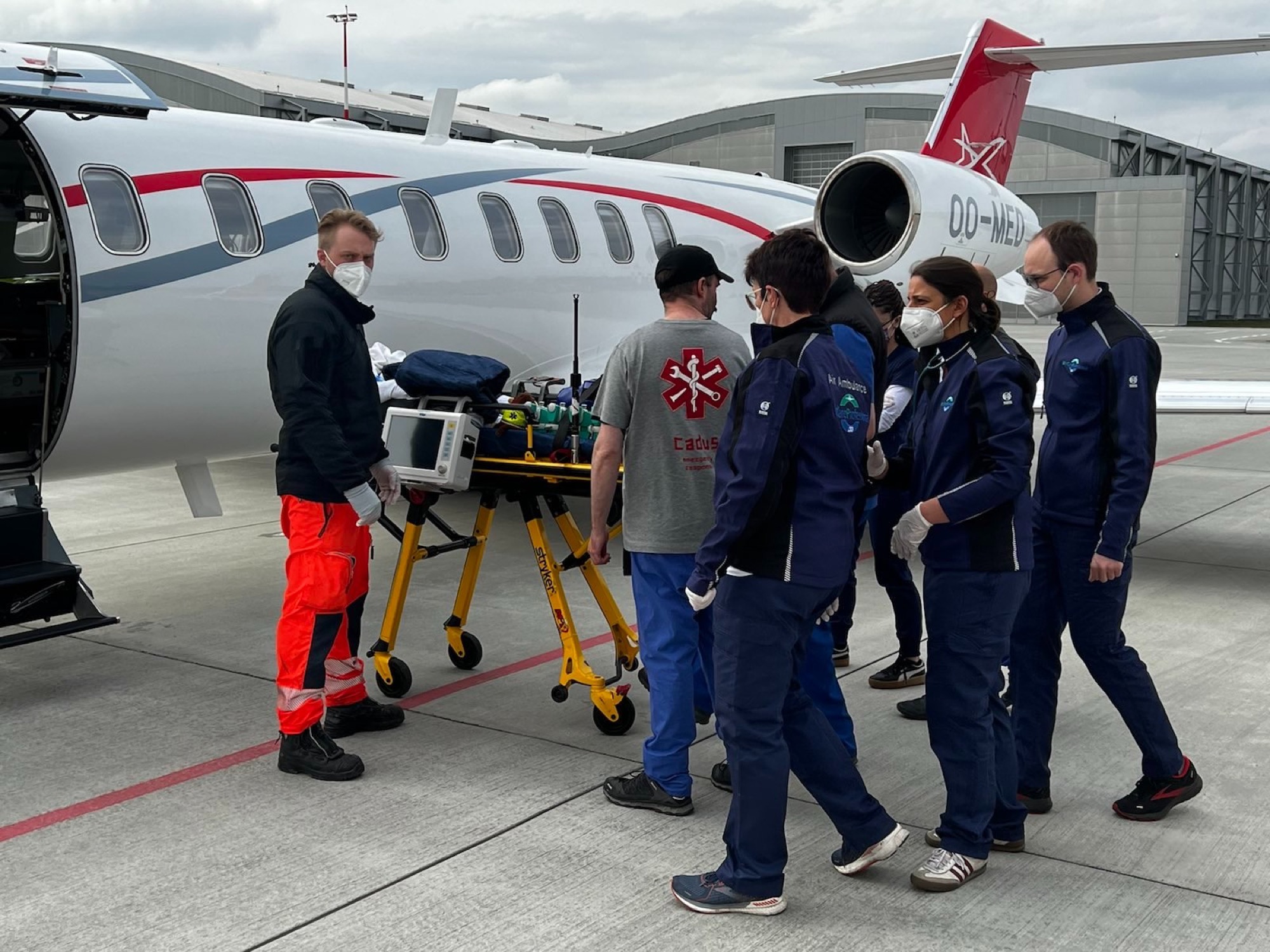 Only the professional cooperation of many players makes patient transport via many intermediate stations possible at all. Here, a small patient at the end of the rescue chain is flown by air to the destination hospital. Photo: CADUS

So we first had to gather a lot of information and adapt the structure of our emergency response to meet the requirements of a possible deployment in Ukraine. We simultaneously started working with grassroots organizations such as Project Nadyia and had discussions within the German EMT initiative, together with the National Focal Point at the RKI.

EMTs are Emergency Medical Teams that meet a quality standard set by the World Health Organization. If, during a crisis or disaster, the affected state asks WHO for medical support, international teams can go into action through the EMT mechanism and are supported on the ground by the EMT Coordination Cell (EMTCC). The quality standards that teams must achieve in terms of staff capacity, equipment, and written Standard Operating Procedures (SOPs) are set out in the Blue Book for natural disasters and similar crises. For missions in war zones, the Red Book, which CADUS was involved in drafting, also applies.

Patients are transferred from all over Ukraine, but especially from the more eastern regions, in order to guarantee their safety and care. Photo: CADUS

The strict guidelines are intended to prevent well-meaning but ill-prepared teams from becoming a burden to an affected region and causing damage rather than helping. Aid should also be tailored and allocated to best meet local needs. This is a reasonable mechanism, but in reality it can also have its pitfalls. It happens time and again (not only in Ukraine) that fully equipped, self-sufficient EMTs have set up in one location with a great deal of logistical effort, where, contrary to initial estimates, there is hardly any need for what they have to offer. Finding the right path is not easy for anyone in a sudden, massive crisis. That includes established humanitarian organizations.

On March 17, 2022, we were off: our van packed with EMT equipment and the already well-established all-terrain vehicle rolled out of the yard of our headquarters in Berlin. Soon after, the four-wheel drive ambulance we had acquired on short notice followed. It was only through the great teamwork of full-time and volunteer staff at all conceivable times of the day and night that we were able to get the vehicles into action so quickly. 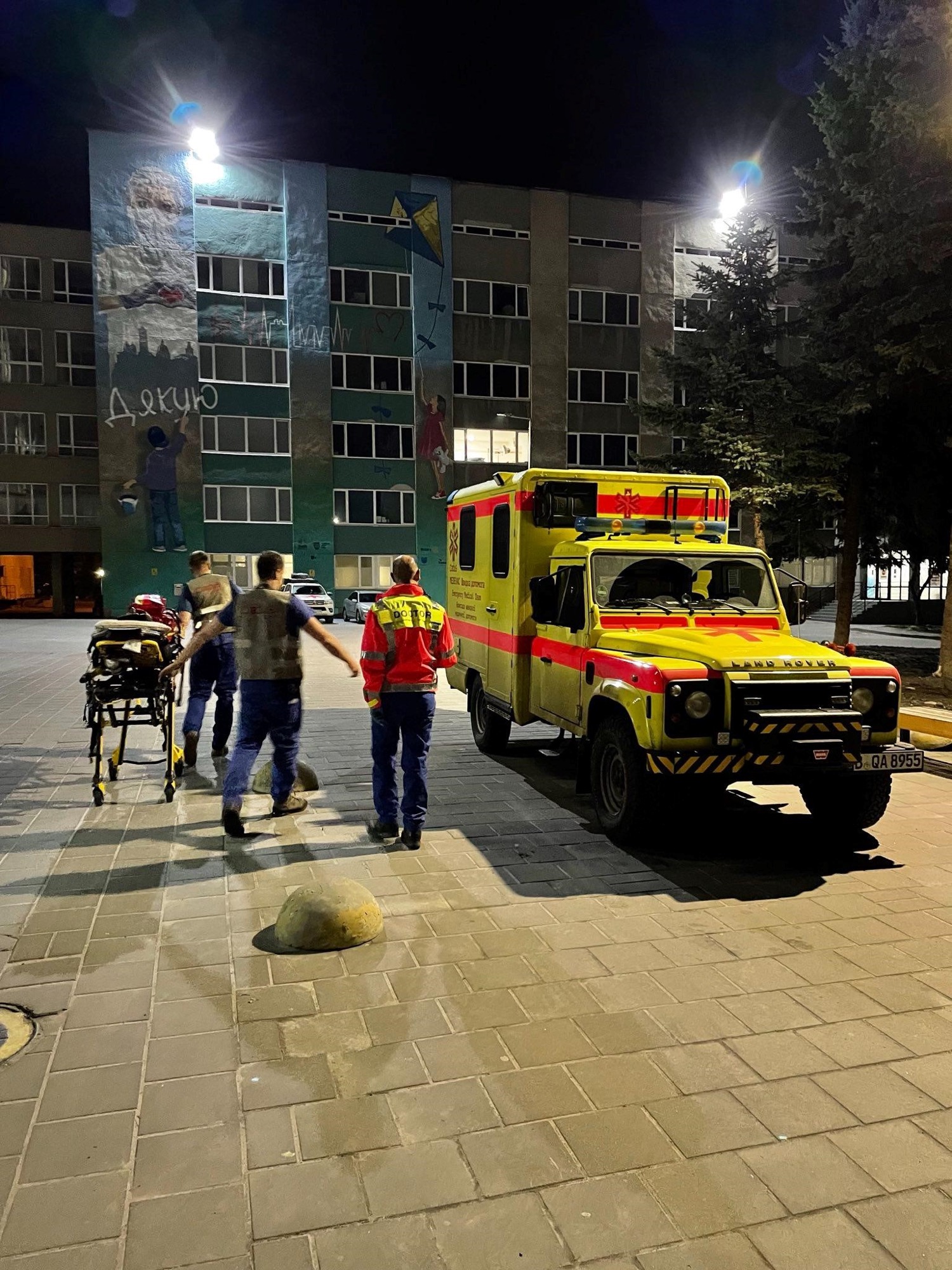 Even late at night, our teams are still on the job. Photo: CADUS

Once in Ukraine, we consulted with both the newly set-up humanitarian structures on the ground due to the war and the established Ukrainian health facilities working at full speed to determine where we could best help. MEDEVAC (medical evacuation) right in the combat zone? Or rather set up a small medical care point with our EMT tents just outside Lviv? We were looking for a way to cover the sudden additional demand for medical care caused by the emergency situation without unintentionally leading the Ukrainian health care system into a new dependency through our "service" from the outside. Supporting local structures in the crisis in the short term until they can cope with all challenges again themselves is the guiding principle of humanitarian emergency aid.

Medical Evacuation and the Question of Privilege

Today, we are not deployed to the front lines, and our tents for the EMT camp are safely stored. The gaps we have identified with WHO and the Ukrainian Ministry of Health are these: because of the war, many patients, especially in eastern Ukraine, can no longer get the kind of medical care they need. They have to be transferred, often across the western border to other European countries. But because of the war situation and changes in legislation, Ukrainian ambulances are not allowed to cross the state border, nor are men of military age allowed to leave Ukraine. We had to experience how strictly this is handled during our first MEDEVAC trip to Poland: it took us a lot of convincing at the border to be allowed to transfer our hemiplegic but male patient to an EU country for treatment. In addition, the ambulance service in Ukraine is for the most part not trained and equipped to transport patients requiring intensive care over longer distances. This applies in particular to ventilated patients. 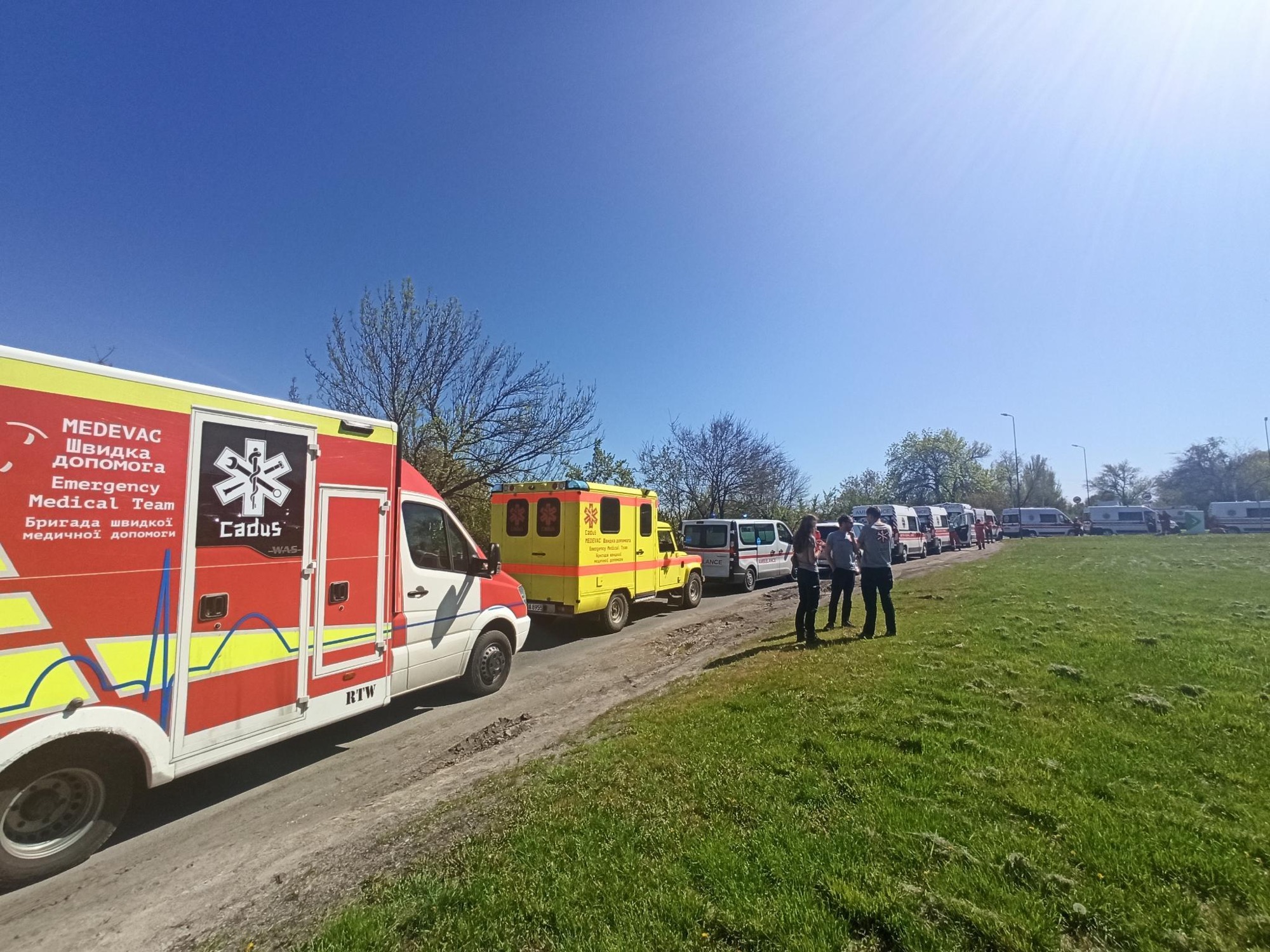 A mass transfer of patients is made possible with a large contingent of emergency vehicles from a variety of organizations. Photo: CADUS

We are privileged as an international team because war has not been imposed on our own countries and places of origin, and we can move relatively freely. There it is again, the privilege of humanitarian workers: free to choose whether to stay or go, while those to whom we offer support often have no choice. However, there is not much time to think about this during this mission: the long patient transports are exhausting. There are hardly any breaks: in Lviv, trains arrive again and again with injured people from eastern Ukraine who have not yet been treated. Here, too, the CADUS team is an important part of the rescue chain.

In the meantime, we are working together with many great partners on the ground, who are also carrying out MEDEVACS: SP,GRM,IRT. But in the beginning, we were one of the few organizations that had the rescue capacity and wanted to leave no stone unturned in joining the existing forces on the ground in the best possible way. Thus, on April 15, we received a mandate from the WHO to set up the current MEDEVAC system together with the Lviv Rescue Control Center, including the establishment of communication channels and standards, and to work with the UN Trauma and Rehabilitation Technical Working Group in Ukraine. CADUS was the first and still is the only organization from the German EMT initiative to engage in emergency relief on the ground during the current Ukraine war, and now coordinates all official MEDEVAC trips by international rescue organizations between Ukraine and surrounding states. 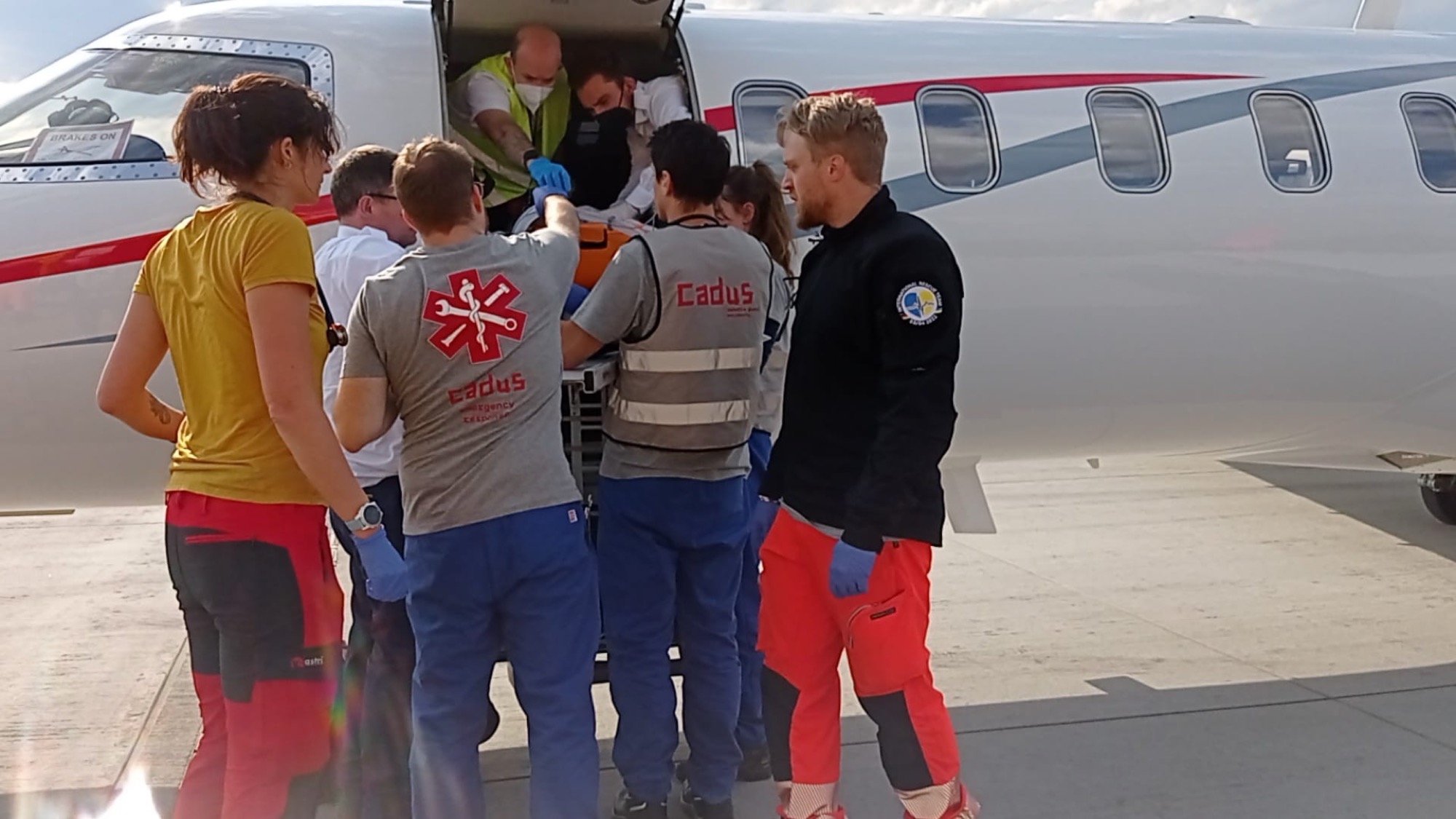 Air transport is the fastest way to transfer patients safely and with low stress to a hospital outside Ukraine. Photo: CADUS

There is still a lot to be done

Intense weeks lie behind us, and probably many more ahead. While in Europe the news about the war in the East is slowly becoming the daily routine, for us in the field the pace is steadily increasing: there are always new requests to CADUS. And although we are aware that we cannot respond to all of them, it is sometimes difficult to take the appropriate decisions. There it is again, the question of the right way. If anything, it can only be fully answered in retrospect. And until we can look back on this war as an event that happened in the past, a lot of time will probably pass.

Please forgive us if we can't answer all your questions right now. We are really very busy at the moment. But we are very happy about your support! Whether as a medical professional on mission with us, or with a small donation: all help is welcome, and enables us to continue.