For security reasons, we cannot show Farah's face or use her real name.

"A woman must always be strong to continue her life."

"I want to tell every woman to be as strong as possible. Don't let anything destroy you anymore. Not a man, no, not circumstances, nothing. A woman must always be strong to continue her life."
These are the words of Farah, who spoke to us on the occasion of the international Women's Day about her life, her work as a teacher and her flight from IS. Farah now works as a translator for Cadus in the Al-Hol refugee camp in northeastern Syria.

Farah was in her early 20s when she had to give up her peaceful life for the first time. Her hometown in northeastern Syria was one of the first to see massive protests against the Assad regime in 2011.
Asked about her life before 2011, she smiles, "Sometimes when I close my eyes and remember, I actually call it the sweet past, the sweet past, oh. It was really wonderful." 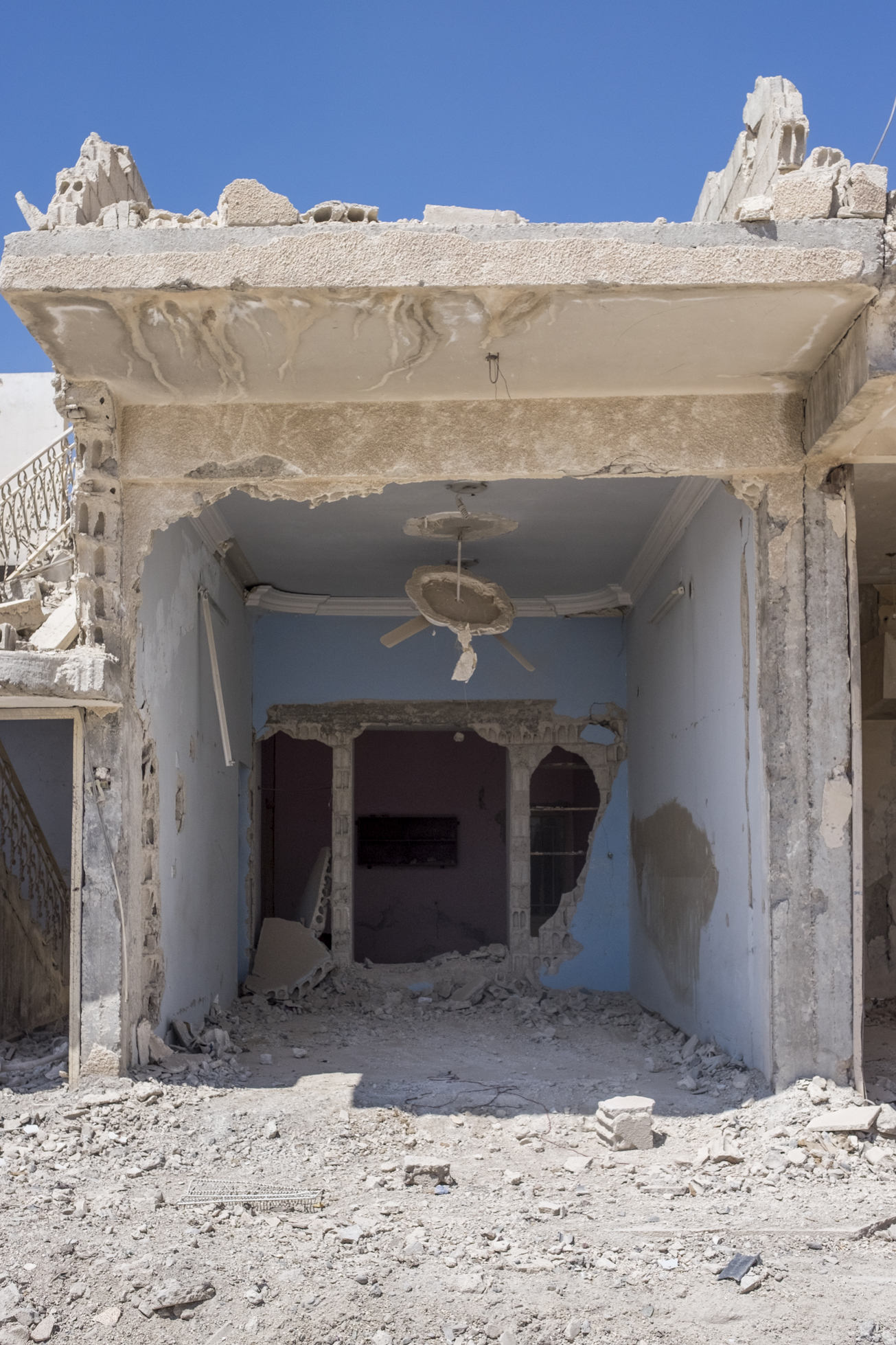 But that time was quickly over once the Civil War began. Farah's town saw alternating battles between the regime, rebels and IS. She remembers the conflicts with horror, the loss of her own home. The agonizing uncertainty about where her relatives were - for days, months.
The loss of the family home hit Farah particularly hard. A few months earlier, she had fled to the countryside with her family to escape heavy fighting in the city. When news of the destruction reached her, it felt as if all her dreams for the future had crumbled along with the walls of the house.

Many people in Syria suffered the same fate as Farah. A destroyed residential building in Kobane, a town on the border with Turkey. Photo: Christoph Löffler

Life under IS control

In the midst of these hard times, IS took control of Farah's hometown and introduced Shariah law. These rules of life, imposed by IS, restricted almost every part of daily life. Women were practically banned from public places, they had to wear the niqab* and had no right to show their bodies or apply make up.
Despite all the restrictions, Farah tried to be as independent as possible. Even while studying English literature, she earned her own money as a teacher so she could be self-sufficient and not have to ask anyone for money.

When the region came under IS control, Farah gave private English lessons to children and adults. With the Islamic State coming to power, it became illegal to use the regime's teaching materials. Defying these rules was severely punished, and at the same time, the IS teaching materials were riddled with propaganda and hardly useful for normal teaching.
Farah could not bring herself to stop teaching. She found a secret way to continue teaching her students.
This went well for a while, until one of Farah's students was stopped on the way to class by IS authorities and forced to betray the school. That's how Farah and her colleagues were found by the Hisbah, the Islamic morality police: Smoking, with no separation of women and men in classes. Everything about this situation was strictly forbidden according to IS rules. The policemen were furious and threatened the teachers to behead them in front of everyone as punishment. "Imagine that - they threatened to cut off our heads, just like that, here and now! I was terrified, but at the same time I knew I wasn't doing anything wrong. I was just teaching."
Farah and her colleagues escaped with their lives, but they had to take part in a behavioral course in the mosque and were forced to endure a beating with a stick on the back as punishment. If a male relative was present, he had to take the punishment instead of the female teachers.

After this episode, Farah and her family decided to move away. Out of the IS area to a city that was part of the young Kurdish self-administration.
Shortly after, she graduated with a degree in English Literature and married her husband, whom she met during her studies. Her husband, who lived in Stuttgart for three years as a refugee, offered Farah several times to emigrate from Syria. But she held on to her hope for a better tomorrow in her home country, despite all the difficulties. Even if she sometimes can't afford bread or the electricity and water supply are interrupted, she wants her children to grow up surrounded by family and not as strangers in another country.

Working with Cadus in Al-Hol

The years of civil war have left their mark. Loud noises, sirens, women in full-face veils: all this awakened Farah's fears anew, the horror of the past time was again clearly recalled to her.
The job offer from Cadus came at a good time for her. But when she learned that she would have to work mainly in the al-Hol refugee camp, she began to have doubts. The camp mainly houses family members of IS fighters, some still clinging to their old ideologies. She decided to work for Cadus anyway. Without her family's encouragement, she probably would have turned down the job offer after learning that she would be working at the camp every day - how could she meet these people every day again? Talk to them and translate their suffering? 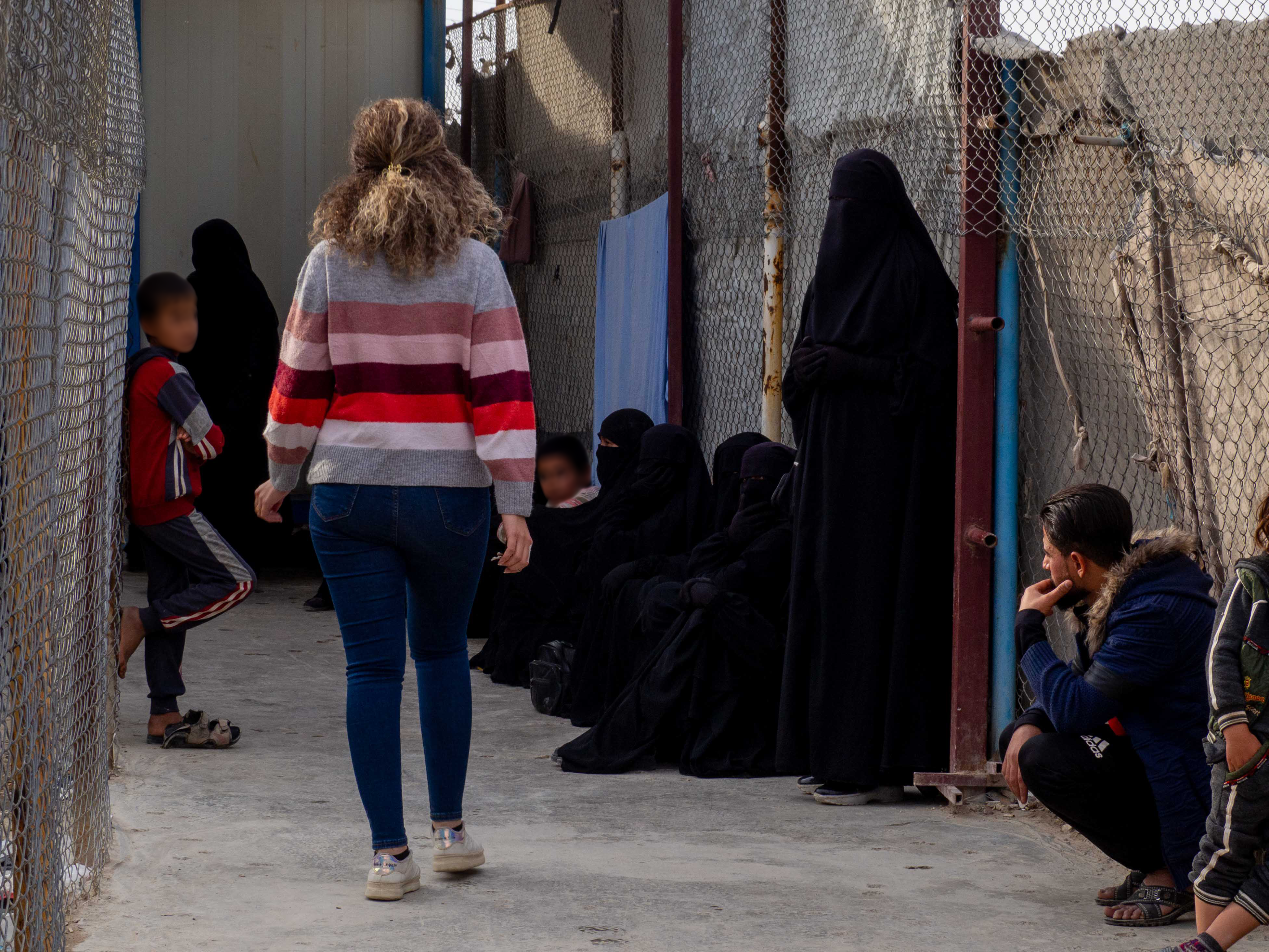 The waiting area for the field hospital in al-Hol. All female residents of the camp wear niqab (the face veil) and abaya (the loose dress). Photo: Carolin Lebek

Farah met Verena, our project manager in Northeast Syria, on her first day and told her in confidence how afraid she was of her new job. But over time, she found her inner strength together with a new conviction - the former IS supporters are just as human as she was, and they needed to be helped: "They wanted to kill us, but we save them. Our idea is the other way around. We help them because maybe they change their methods, change their ideas about people, that people who don't cover themselves are not good people - no, we are good people because we wear our religion in our hearts and not as clothes on our skin."

When Farah returns from her work at the hospital, she has two sons, her husband and housework waiting for her. Although she often wishes her husband would support her, she is very happy that he takes care of the children a lot. Her job then is to cook and clean for everyone.
A few weeks ago, Farah was in her old hometown. However, she did not visit the family home, or what is left of it. She knows it would break her heart to see all her dreams there in ruins: "When you see the ruins themselves, all the good times you had in that place will also be destroyed forever. All the dreams and beautiful moments you had there. I've seen that many times in others, I don't want to experience it myself."

For the future, Farah hopes to be able to live in a peaceful, safe city and eventually open her own store with her husband. Without war, without destruction.  She would like to send her children abroad to study once they grow up and continue to pursue her passion:
"When you teach, you will meet many people. Many people, many different layers of society, the poor people, the rich people. Yes, I like teaching because when I teach people, I feel like I'm really giving something."