A few weeks ago, we announced our intention to work on Lesvos as part of our Emergency Response Balkans. After our team had observed the situation on the ground for a few days, it became clear that as an organization we could not imagine working in the local conditions. The reasons for this decision can be found in our statement below.

About four weeks ago, two members of CADUS arrived on Lesvos to set up a permanent post in the north of the Greek island. Working together with other NGOs that give support during the landing of refugee boats leaving from the close coast of Turkey, we were to take over the medical response during landings and in the camp close by. After one week of assessing the situation, CADUS decided to withdraw for now and revise its approach. We are leaving with the question in our minds how to work in the situation on Lesvos without violating our own as well as humanitarian principles. This is the story of a red line balancing act, and its ending is yet to be written.

When a few years ago more and more boats with refugees landed on the shores of Lesvos, many people in the small village of Skala Sikamineas showed solidarity. Some of the cafés opened their doors for the refugees and were basically turned into hospitals overnight. A permanent support structure developed, with NGOs taking care of the landings until today. Even though the number of boats arriving has gone down, support is still crucial, with a medical response as necessary as ever. As the north of Lesvos generally lacks a medical infrastructure, the task is not only to be there for the refugees, but to be approachable also for medical needs of the permanent residents of Skala Sikamineas and the volunteers from different organizations.

After assisting in the landings, the next question had to be solved: where should those who had just arrived go from here? Mytilene, the harbour town of Lesvos that holds the best chance for an onward travel to the European main land, is 50 kilometres away. To enable the refugees to rest and recover and prevent them from having to walk all the way to Mytilene, the UNHCR set up a small camp for short-term stays, called Stage 2. The newly arrived are taken from the shore to the camp by the UNHCR, and then transported further on in direction of Mytilene the next day. While the camp is officially run by the UNHCR, effectively the different NGOs active in Skala Sikamineas keep it going and take care of the refugees who stay there overnight. 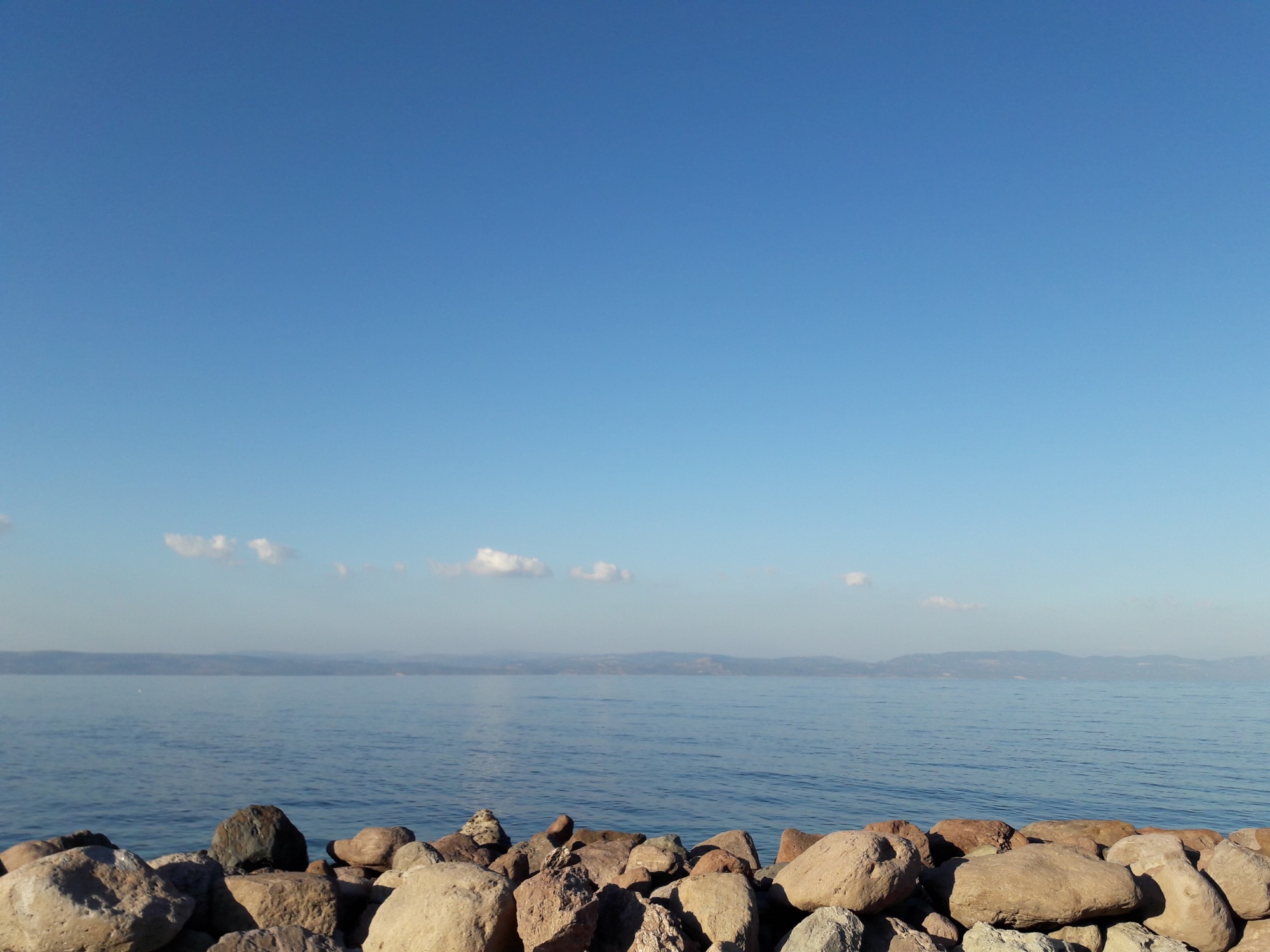 From the port of Skala Sikamineas, the coastline of Turkey is always in sight. Photo: Cadus

So far – so good. Why is it then that CADUS decided these are not conditions that we as an organization feel comfortable working in? A closer look at the set-up reveals problems that touch the humanitarian principles of independence and humanity.

CADUS criticizes that, once refugees have arrived at Stage 2, the majority of the people (apart from the especially vulnerable ones who are separated by volunteers to keep them out of the official asylum process) are transported from here directly to Moria after a short stay. Stage 2 is different to Moria, as it does not have a completely closed part. However, it is surrounded by a high fence and the arriving people are only insufficiently informed about what the ‘official asylum process’ means. The process implies that if the refugees do not secretly leave the camp, they will be taken by bus directly to Moria, which is located just outside of Mytilene. The camp has gained a questionable fame by the terrible conditions that prevail there, in which even children try commit suicide.1 Once in Moria, the refugees are officially registered, and only then are they allowed to move freely again and leave the camp. In Skala Sikamineas, NGOs are required to cooperate with the authorities. This leads to uncomfortable situations, such as those in which an armed member of Hellenic Coast Guard mingles with the volunteers who help during the landings. Our crew experienced that critical remarks in the direction of Frontex earned negative comment, and was reminded that it would be important to cooperate with the authorities to avoid confrontations.

This leaves us with the following problem: The humanitarian principles that CADUS commits itself to declare among others the principle of neutrality from political objectives that any actor may hold with regard to areas where humanitarian action is being implemented.2 In the case of Lesvos, this means that we must not assist the authorities regarding their interest in controlling and detaining refugees that arrive on the island. We must furthermore take care that humanity and the protection of life and health is the guiding principle of our actions. We see this as endangered when refugees are transported to Moria. Furthermore, we want to ensure that our crew can at all times act in solidarity with the refugees and openly criticize political circumstances and institutions that are significantly involved in the humanitarian crisis at Europe’s external borders.

The clinic at camp Stage 2 that was supposed to be taken over by Cadus. Photo: Cadus

CADUS is not the only organization that openly criticizes both the conditions and the political and legal circumstances on Lesvos and in the broader European context. Already in 2016, MSF stopped working directly in Moria and instead set up their station opposite the camp. The NGO did this in order to be able to work independently and not allow themselves to be instrumentalized for policies and procedures that are contrary to the humanitarian principles.3 It is always to determine a red line and its crossings. CADUS accepts that different organizations have answered this question in different ways. Getting access to the people who are in need of humanitarian assistance is a crucial precondition to be able to provide that assistance. For us it is important to discuss publicly the conditions on ground and which compromises have to be made in order to stay operational. CADUS wants to use their public voice in order to make their efforts sustainable, and to prevent human suffering in the future.

Our retreat raises the question of responsibility towards the refugees, who are the most vulnerable within this area of tension. We are aware that medical support is urgently needed in the north of Lesvos. In order not to leave the people without access to medical assistance, we decided to support the work of a local nurse who already provided medical aid during the landings and within the camp in the last few months with donations. She was able to continue the work for another month. We wanted to make sure that the people in the north of the island are not left without any medical care during the transitional period.

At the same time, we would like to encourage other medical organizations to provide support during the landings in Skala Sikamineas. It is necessary to be aware of the local situation, but we would be happy to share our current knowledge so that the arriving refugees can be provided with the medical treatment that they need.

We at CADUS hope that we will be able to return to Lesvos and give the medical support that is urgently needed. But for now, we have to revise our approach and develop a plan how to work in these difficult conditions.

Our mission in Bosnia stays unaffected by this decision. If you have questions don´t hesitate to contact us via info@cadus.org.

1.) https://www.dw.com/en/children-contemplating-suicide-in-greeces-moria-refugee-camp/a-45597294
2.) See the wording of the humanitarian principles by UNOCHA: https://www.unocha.org/sites/dms/Documents/OOM-humanitarianprinciples_eng_June12.pdf
3.) See the statement of MSF: https://www.msf.org.uk/article/why-is-msf-closing-its-moria-project-on-lesvos