For almost four weeks we have been daily treating the inhabitants of the camp Kara Tepe 2 on Lesvos. Through medical access, we gain an insight into life in the camp. Many clinical pictures repeat themselves again and again. They are probably directly related to the current living conditions there, and range from frequent back problems, due to sleeping on the tent floor, to serious psychological problems.

Lack of opportunities for hygiene is a major problem

Our Medical Coordinator, nurse Jo, reports: The three most common reasons for people coming to our clinic are skin diseases, wounds, and digestive problems. A particularly common skin disease is scabies, for which we are only able to help people to a limited extent. Besides the medical treatment, it would be important to change clothes and blankets and to be able to take a shower. The infrastructure providing these things is still completely insufficient in the camp. A recently started scabies treatment program has a capacity of only 20 people per day, way too little for the high demand. The many fungal diseases and inflammatory skin diseases that we see in our daily work also indicate a lack of hygiene in the camp.

The situation is similar with digestive problems, also called gastrointestinal complaints. The most common is diarrhea. With our camp-internal ambulance service, we transport patients, often pregnant women, who are so weakened by persistent diarrhea that they cannot make it to our clinic on their own. 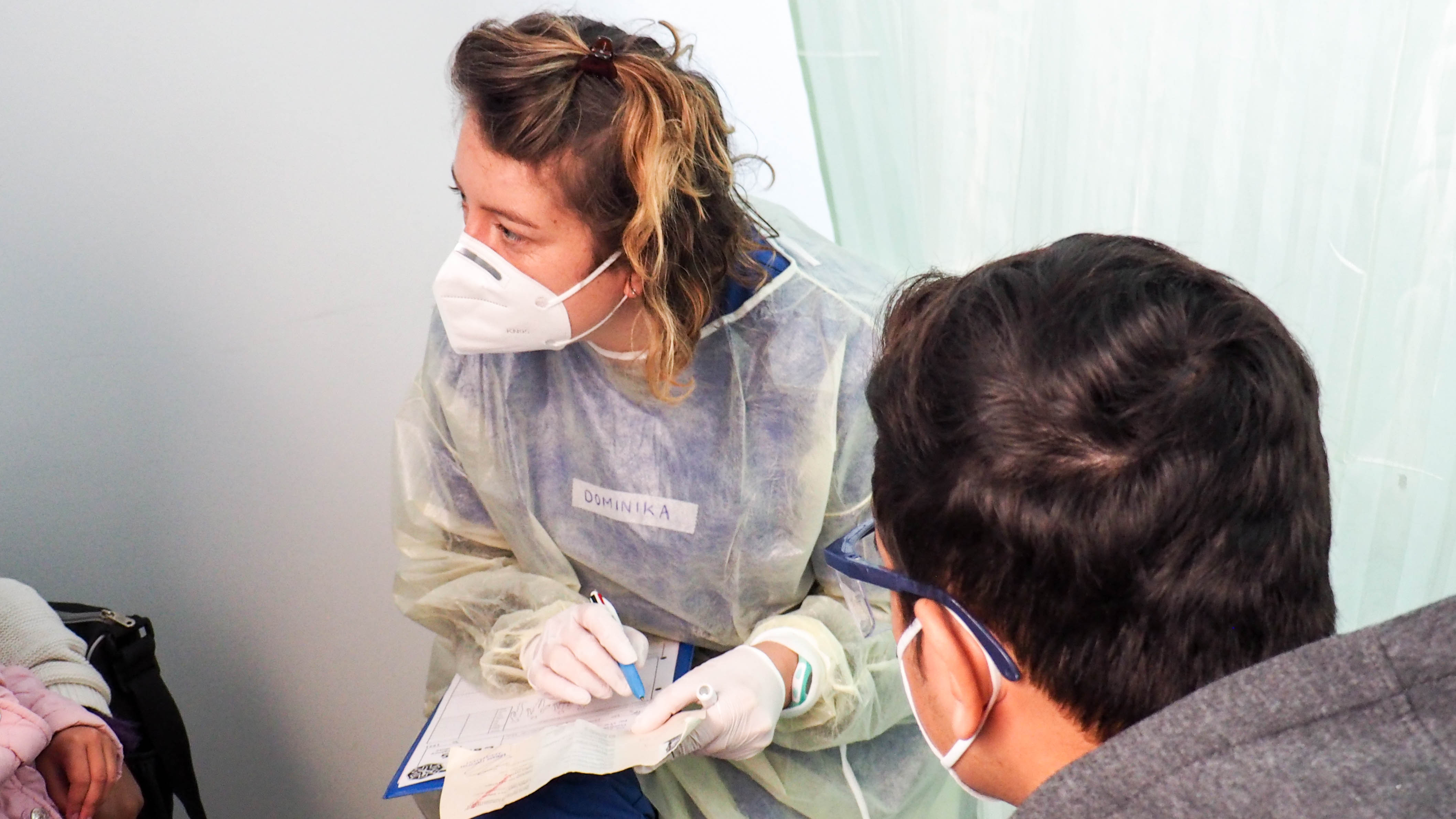 Dominika talks with a patient.

The toilets in the camp are often dirty, and only some have facilities for washing hands. This way diseases can spread unhindered while avoiding the toilets also leads to problems.

Nurse Dominika reports about a patient who has been suffering from a bladder infection for two weeks, who is beginning to show symptoms of a kidney infection. She holds back the urine so that she does not have to go to the toilet. The patient thanks Dominka for the prescribed antibiotic, but she adds: "Prevention is better than treatment. You should take better care of us in this camp. It should be clean, and it should be safe." In fact, female patients with kidney stones have told us that they drink as little as possible out of fear to have to walk to the toilets in the dark. The conditions put a strain on the body and psyche.

Our patient statistics 1.11.-17.11.2020 in Kara Tepe 2. „directly related“ refers to the number of medical conditons that seem to be directly related to life in the camp. "Referrals" mean referrals to specialists and psychologists.

The conditions are hard on body and mind

Our patients often know very well what makes them ill. Many suffer from stomach aches and heartburn. After the fire in Moria, the symptoms have become worse, a patient tells our doctor Leonie. When asked whether her symptoms could be stress-related, she nods and tells us that she also suffers from sleep disorders and lack of appetite. When Leonie asks her patients whether their complaints could be of a psychosomatic nature, they quickly agree with this diagnosis. In Germany, people often feel that they are not taken seriously when asked about this, they vehemently deny a psychological cause of their symptoms. But the people in the camp are grateful for the acknowledgment of their mental stress and often wish they could talk about it.

Our medics hear difficult stories - of rape during the escape, of children who "stayed at sea". The people who come to our clinic are survivors who fight battles every day: finding a way to deal with what happened and being recognized here and now. When our medics attempt to help the patients finding the appropriate psychological support, we often do not know whether it was successful. Although there are important and diverse offers from various organizations, they are overrun by demand. The need for psycho-social and psychiatric care is enormous. 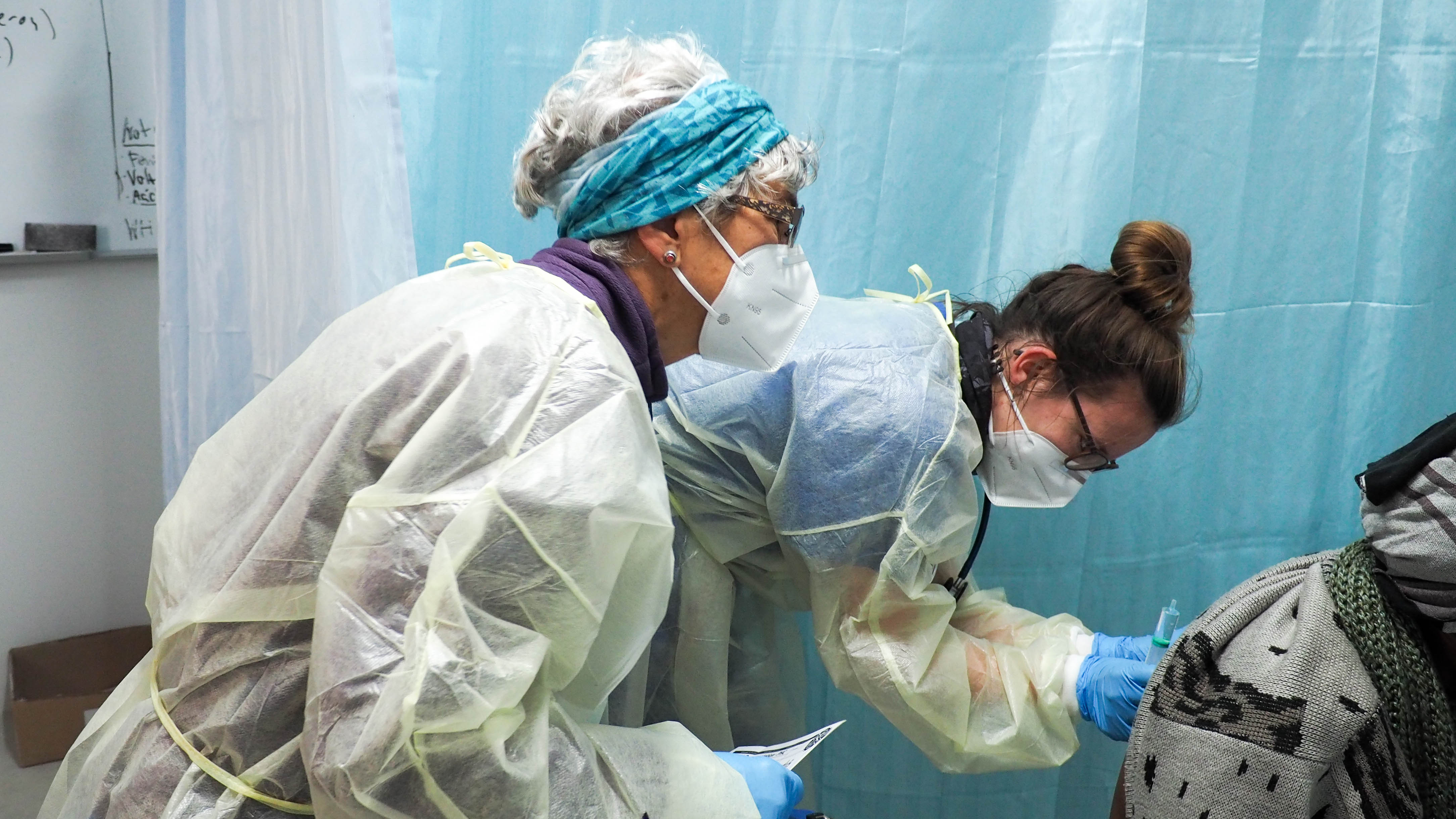 Angeles (left) and Leonie (right) treat a patient in the clinic.

The nurse Angeles talks to a patient who lost her child on the run and now suffers from memory loss and depression. Together they drew up a simple mapping guide for her to remember her appointments and for other people to help her if she gets lost in the complicated system. Angeles comments: "A kind of organized chaos sets in the camp".

The problems are structural rather than medical

The infrastructure of the camp, whether medical, sanitary, or in terms of accommodation, is constantly being expanded. But there are still large gaps. The winter is approaching, at night it is already getting very cold. Heating is planned for the large collective accommodations, and there are rumors that the smaller tents will be replaced with containers. Nobody can tell us if and when this will happen. The promises of various European countries, including Germany, to take in more refugees from Greece, have not been fulfilled. Sometimes the lockdown is cited as the reason for the delay, sometimes the countries accuse each other of not having followed the right administrative path.

For our medics, one thing is clear: the problems are often of a structural nature, and rarely purely medical. But even if it sometimes seems like a fight against windmills, we give our best and care for the people as well as we can.

Your donation helps us to stay active!

The crew talks about their work in Lesvos: "A lot of people are overwhelmed and powerless"

Two members of our crew, who've been in the camp Kara Tepe 2 talk about the time they spent there. Rebekka (doctor) and...

For most of us war is something abstract, something that happens to other people far away from us. But the people in...

At the CADUS Crisis Response Makerspace, where normally sawdust flies and welders flash, since two days there are many...