People in war zones usually have no choice. They live in the destroyed buildings and are defenseless against the violence of the attacks. Symbolic picture: Kobané, Syria 2015 @Christoph Löffler

The views expressed in this article are those of the author and are not necessarily the official position of CADUS e.V.

Since the end of December, until a few weeks ago largely uncommented by European media, over a million people in Syria have been on the run again. Fleeing from Russian air strikes, heavy artillery strikes on densely populated areas, from the ground forces of the Syrian army. Idlib is approaching what can only be cynically described as the end of the nine-year war in Syria. An end in the form of millions of sufferings, blind destruction, looting and humiliation. In short: an end in the form of Assad's rule.

Since the beginning of the spring 2011 protests in Syria, it has been shown that Assad and his supporters have calculated one thing very precisely: the extensive inaction of the international community. Shootings of protesters and deliberate enforced disappearance, which were also used by other dictators in other Arab countries at the beginning of the Arab Spring, had further consequences in addition to vocal criticism. Sanctions, cancellation of military aid, military intervention to protect the civilian population and even a "regime change". Nothing like that in Syria. On the one hand, this was due to effective leverage points on the political and diplomatic stage, and on the other hand, it was also due to misassumptions from other military interventions in the region. Through extensive diplomatic non-engagement, Assad and the rulers in Moscow and Tehran supporting him were suggested, that Europe and the United States did not want to see regional or even global showdowns because of another Arab uprising. With fatal consequences.

Red lines in the sand

Local protests became liberated towns, and towns then became entire parts of Syria that were no longer under the control of the Syrian government. At the same time, Assad escalated the use of military force against those who dared to escape the rule of his system. Mass shootings of soldiers who refused to give the order to fire, systematic rape and massacre of the civilian population by loyal soldiers or state militias; the list of crimes reads like a horror scenario already back in 2012. And for the affected population it was nothing more than that. Assad's regime added a nuance of meaning to the concept of genocide, no longer assigning it to a certain social group only, determining the right to live, even being in certain regions "qualified" for extinction. The procedure is as simple as inhuman. The Syrian army, unable to hold areas against even lightly armed and largely uncoordinated groups in the early stages of the civil war, relies on area bombing and aerial destruction of vital infrastructure. Where the civilian population flees, according to the cruel calculation, the willingness to resist the military disappears. When an area is almost completely destroyed, the last loyal army units advance in a pincer movement under the protection of Russian-led artillery, Iranian stormtroopers and Russian air superiority. If this tactic does not lead to success or is too slow, the last weapon remains in the arsenal: chemical agents. 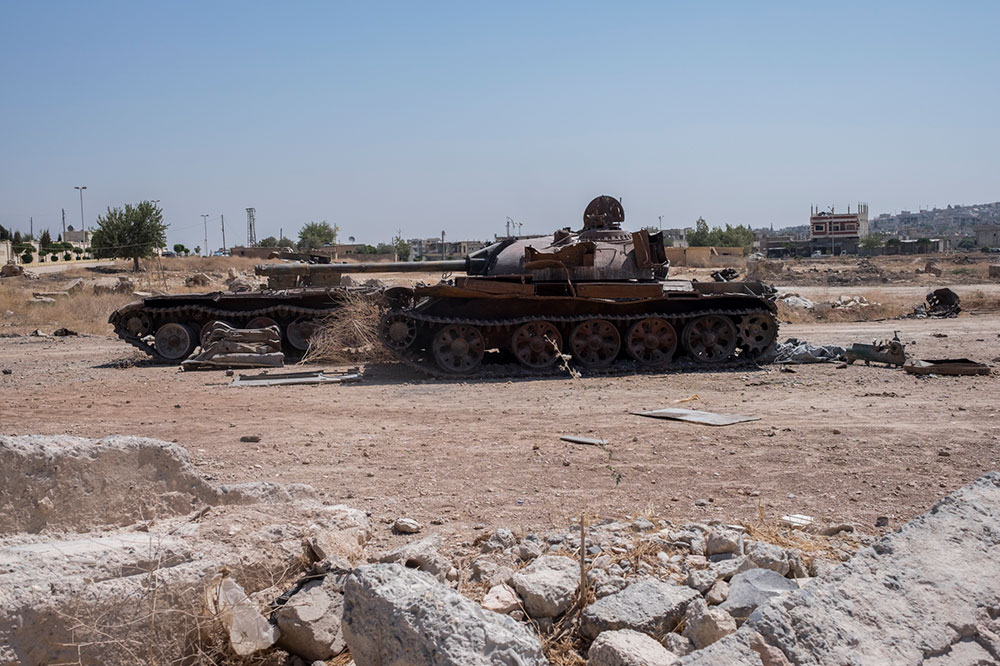 The methods listed are outlawed in warfare between states, and in some cases strictly prohibited. In the (recent) past, everyone in power disqualified himself on the world political scene who even used one of these inhuman war practices in civil or interstate wars. Assad, on the other hand, exploits the entire arsenal available to him in addition to industrial torture, starvation and displacement as described. Without extensive reaction from the international community.

He does not have to fear threats, he responds to every broken norm with a further escalation. The red lines shown exist in this conflict, that's right. However, they have not been and are not drawn by democratic states in the confrontation with the Syrian regime. Rather, it is Assad who draws red lines with the blood of hundreds of thousands.

Between impuissance and indifference

The phrase that the conflict in Syria could not be resolved militarily has been repeated in European capitals almost like a mantra since 2012. Iran, Russia and Syria were naturally of a different opinion and showed the world that the conflict can definitely be resolved by military means. Just not in the sense of a humanistic policy of values.

What was actually meant at security conferences and roundtables, the conflict in Syria shouldn't be resolved militarily, please. Such an appeal may seem effective between actors who adhere to accepted rules of the game. Unfortunately, even in liberal democracies, power politics does not always follow a value-oriented guideline. It follows it even less, not at all, in systems whose sole aim is to help a small group gain and hold power. To a certain extent, the question of how to deal with one of the most serious humanitarian catastrophes of the past 40 years shows, for example, the moral dilemma of the "Western community of values". Human rights in other countries or regions are only absolute if there is a duty to act from these countries. If guarantees or even serious actions are necessary to protect these rights, as have been demanded by Syrian activists and civilians for years, the absolute level of human rights can be debated in five-star hotels.

The demand "Never again!", which arises from European, especially German history, was expanded in the course of the Cold War by a "Never Again War". Wars should never again plunge people into unimaginable suffering. So far, so good! “Never again!” does not only refer to the horrors of the Second World War, they demand much more a “Never Again” specifically of: industrial torture and extermination, the extinction of entire cities and towns in the wake of partisan struggle, the dehumanization of groups because of them attributed characteristics. Enduring this moral balancing act, putting a categorical "never again war" behind a "never again" in extreme emergencies, European states have done this balancing act less and less since the end of the Cold War. The absolute avoidance of armed conflict to avoid armed conflict is ultimately a hollow morality. 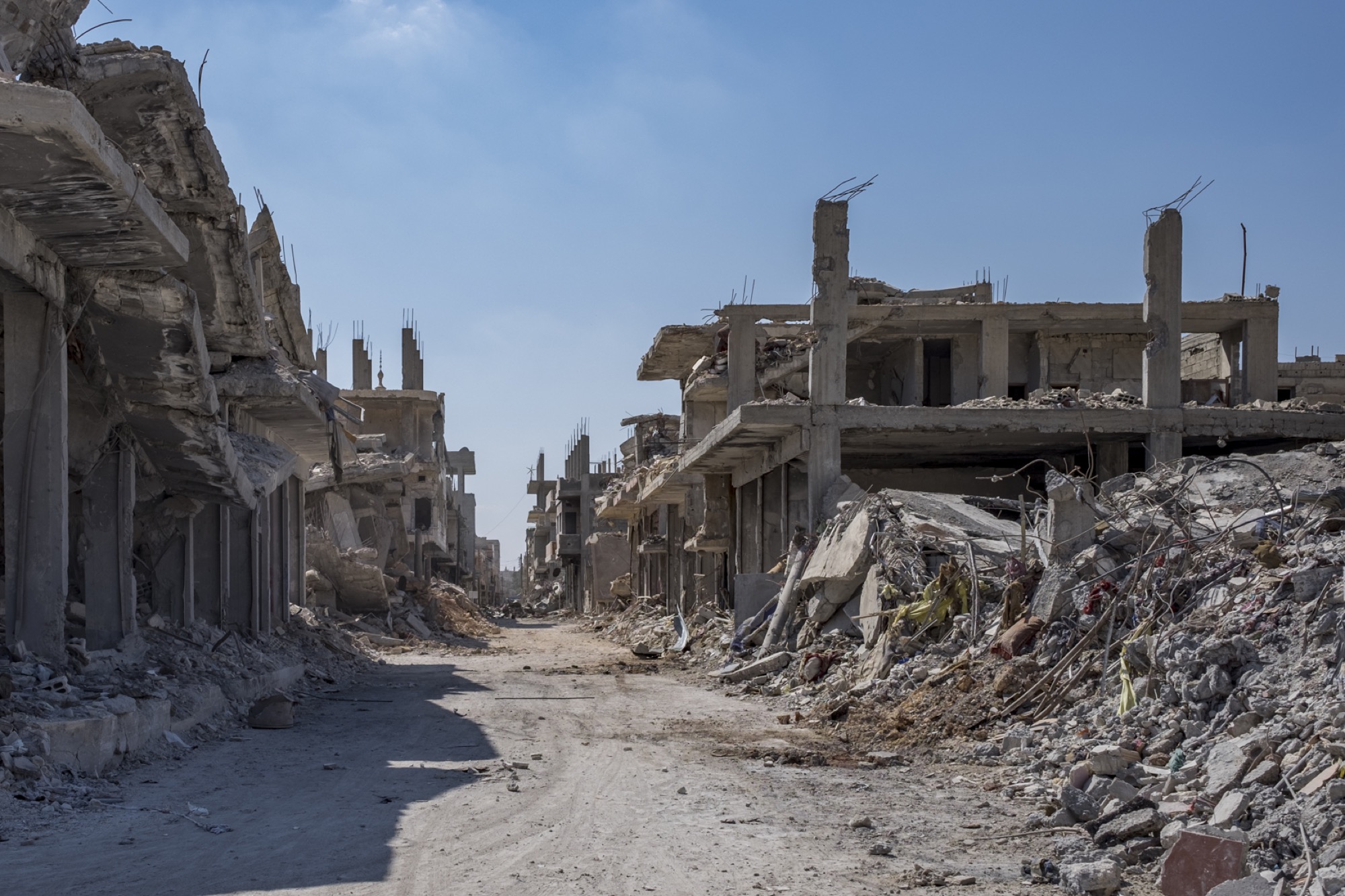 Whether in battles against ISIS or Assad's troops: what used to be home and a place of work for people is, after grueling bombing, only concrete frames. Kobané, Syria 2015 @Christoph Löffler

Explaining to a family in Kafr Nabl that armed intervention on the part of NATO would, at worst, have made everything worse, at best brought nothing, is not only morally corrupt. It is factually wrong. There is no "worse" for the remaining people in Idlib. Thousands of them have a choice between death from freezing, death from shooting or death from torture. The fact that it is now an autocrat like Erdogan to reach a small no-fly zone in parts of Idlib through the targeted arming of the last Islamist militias is a shame for progressive societies. With minimal effort he succeeded in what hundreds of thousands of Syrians desperately asked the West for years.

Europe's self-imposed incapacity to act, its focus on symptom control and its insistence on a political solution when the other party is committed to a violent solution, shows that the civil war in Syria will have an impact on the global community for decades to come. State leaders, civil societies, international organizations, all will have to deal in one way or another with this collapse of a system of values ​​believed to be certain.

"Assad or we burn the country"

For people in Syria, the region, and other autocratic systems around the world, academic discussions, if conducted, are likely to be too late. Assad has proven that the most ruthless wins. That brutal violence is not necessarily confronted and contained, if necessary, also with military means. That values ​​are always negotiable and that the price of human rights crimes in European capitals is not even very high. Dictators and autocratic regimes around the world have been watching Syria since 2012. Here it has been decided how free societies want to defend universal values. Or just how they don't want to. Assad and his like may have won this time on the military and political arena. It is time to learn lessons from this civilization break. Otherwise, rulers of violence will win ideologically again in a few years. Syria in 2020 is the blueprint for dictatorships in the 21st century. The intention to secure your own rule with uncompromising violence has not been a gradual, invisible process. From the beginning there was only one thing for Assad and his henchmen: submission or death. "Assad au nharq al-balad", this slogan already graced the walls of reconquered villages in 2012 as graffiti. Like no other expression, it stands for Bashar al-Assad's claim to totality, either his rule or nothing. Assad or we burn the country. This is the choice that keeps people outside the control of the Syrian regime, in Idlib  but also in the relatively quiet Rojava. With the help of brutal militias, Russian and Iranian support and also thanks to the helpless inaction, this gloomy prophecy for civil society and military opposition in all parts of Syria will come true in the foreseeable future. A small but serious misconception speaks of the undisguised threat of the grafitti.

It did not follow Assad's rule OR the destruction of the country. Both followed.

70 years Geneva Convention - an anniversary with a smack

The Geneva Conventions celebrate 70th anniversary. Increasingly the four agreements, which can´t be overestimated in...