A new morning dawns. Symbol for a peaceful future for Mosul and Iraq? ©Kenny Karpov

Mosul two years after "liberation from ISIS" - an evaluation

The reconquest of the Iraqi city of Mosul and thus our medical mission in the west of the city came to an end just over two years ago. Since then, little can be heard from the second largest metropolis of Iraq. Reason enough for us to take a look at the current situation. Where does the city stand with its inhabitants today, what are the conditions and where do perspectives develop?

The fight against the self-proclaimed Islamic State came to an end in Iraq's second-largest city two years ago. The coverage of the city and its inhabitants is often characterized by the narrative of the "former IS-stronghold", from 2014 to 2016 "capital of ISIS" was the overwhelming denominator the press could agree upon. One and a half years later the recapturing campaign for the city on the Tigris was in the interest of the world public. Inside views were not present, in the fight for the old town frontline journalism prevailed. A reporting characterized by the point of view of the Iraqi security forces with the inhabitants of Mosul as mere extras.

This does not take into account the millennia-long history of the metropolis, nor does this shortening allow any further analysis of what the life of the population might look like after the reconquest of the city. We at CADUS also look at Mosul through the lens of our assignment in the summer of 2017, at the same time we also asked ourselves on this anniversary what people in Germany probably still hear from the city, when the newspapers are not anymore filled with headlines about war and destruction in Iraq's second largest city.

The reconquest by Iraqi security forces was accompanied by one of the most massive bombing campaigns on a major city since the end of World War II. While East Mosul fell relatively quickly, fierce battles were fought over the western part of the city. East Mosll, set up by Saddam Hussein in the 70s and 80s as the western, modern counterpart to the "old", poorer Mosul on the western side of the Tigris, fell early back to the Iraqi army and was subjected to much less artillery and airstrikes. Due to the broad highways and the more open structures, much of the expected house-to-house fighting in the east of the city remained undone, the fighters of the ISIS retreated to the west. 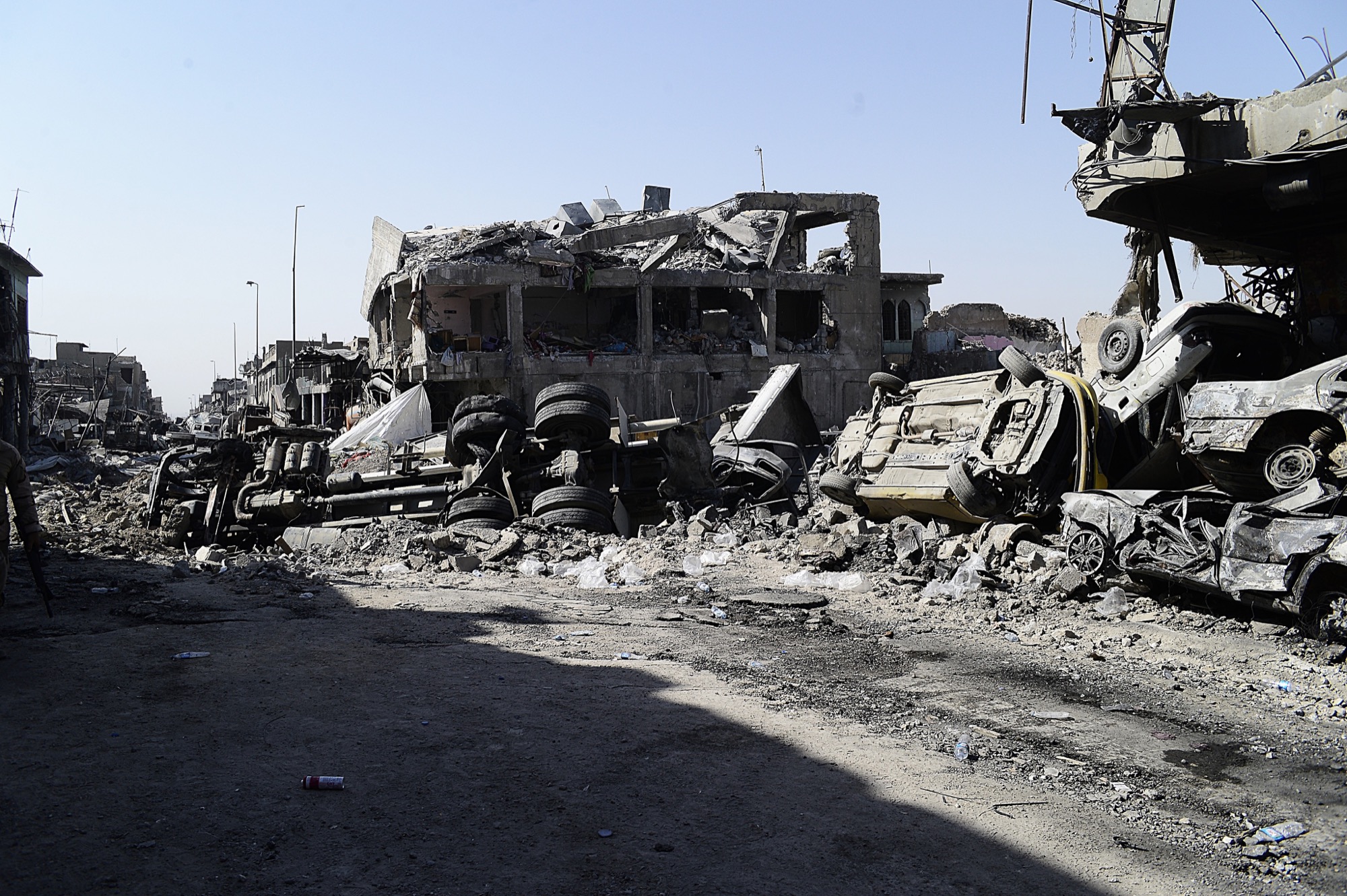 The extent of destruction in West Mosul 2017 can be guessed from this road. ©Kenny Karpov

There, in the narrow streets and especially in the small streets of the old town a fierce fight raged from January 2017 to the end of July the same year. In the final phase, when CADUS was directly witness to the fighting, the armed forces' actions consisted of massive bombardment in order to avoid conquering streets in urban warfare. The streets, sometimes too narrow for two people to walk side by side, barely gave cover for the Iraqi army. The result: almost 80% of the building fabric in the west of the city was considered damaged in December 2017, while the number in the old town was just under 90%. The inhabitants of the west bank of the Tigris were proportionately more affected by expulsion than people in the east, many are still living in camps around the city or have fled to other parts of the country as IDPs (Internally displaced persons).

Between rubble mountains and luxury refurbishment

After the end of the fighting a quick reconstruction was promised to both parts of the city. The strengthening of ISIS in the city was viewed in Baghdad trough the lens of missing economical and political participation opportunities, at this time partially rightly so. However, the announcements were followed by only a few concrete measures which, in addition, affected both parts of the city very differently. Prestige projects, such as the University of Mosul (in the east of the city), have been tackled quite swiftly, while entire districts in the western part are still in ruins until today. In some cases, even the access roads were not cleared by the state, so that returnees took on this task themselves. The rebuilding of the historic city center, the last center of the fanatical resistance of a few hundred ISIS fighters, was also supposed to be such a prestigious object, with which the Iraqi government could regain lost confidence from the population of Mossul. Instead, almost nothing happened for two years. Even the salvage of the thousands of bodies under the rubble was only tentatively tackled.

This summer plans were announced by the Governor of Nineveh province, according to which the old quarter should be completely demolished to make room for malls, supermarkets, and luxury restaurants. A reported conversation with owners of the houses, which are to fall for a small compensation to the state, shows the lack of sensitivity of the central government in dealing with parts of the population.

A resident and homeowner asks the governor what will happen to the destroyed houses. The governor says that a new page should be opened: "[...] let us not look back at the topic of reconstruction but build a modern city.

Talks are already taking place in the background with foreign investors, including those from Asia and Western Europe, in order to advance plans for a sterile, entrepreneur-friendly city on the Tigris. The fact that these plans can also be pushed against the will of the inhabitants illustrates, in addition to reconstruction and shadow economy, among other things the third major problem in the life of the city: the Hashd ash-Sha'abi.

The power of the militia

The Iranian-trained and led militias consolidated in the summer of 2014, following the partial collapse of the Iraqi army in the wake of the loss of Mosul and other parts of the Iraqi north to the so-called Islamic State. As an important component in the fight against the terrorist organization, these militias have succeeded in penetrating considerable parts of the economic and political landscape, following the example set by the Iranian Revolutuionary Guard Corps. Since the end of the fighting in Iraq, the political dealings with the Popular Mobilization Forces (PMF) in Iraq, which are often perceived as an Iranian proxy militia, are a political issue. They often control the security architecture in many areas, that the government in Baghdad considers unreliable, unchecked. For example, the Iraqi army and federal police are less represented in Mosul than the numerous PMF brigades.

As the strongest security actor, the militias determine not only the possibility of returning to the city, but also the granting of concessions, goods traffic and  through their political network, the already mentioned transformation of the old town into a investor-friendly Dubai 2.0. The high efficiency of the militias in the fight against the ISIS was fueled by the religious beliefs of the primary Shia associations. It is also this conviction that makes many brigades see the Maslawis* as a collective, as residents who welcomed ISIS and supported them to the bitter end. This leads to fundamental hostility. The PMF brigades are often seen not as liberators from Daesh, but as new occupiers. 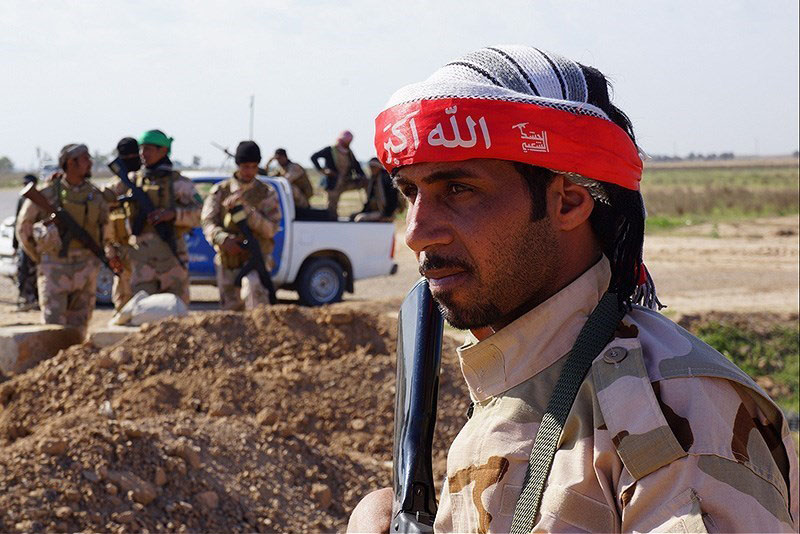 Fighters of the Popular Mobilization Forces and the Iraqi Army at a deployment in Salah ad-Din. ©Tasnim News Agency, CC-BY 4.0

This basic mood, paired with absolutely catastrophic living conditions in the western part of the city, are already exploited by ISIS for their adavantage. Without well-established local communities, which also served as social control systems, ISIS cells can move back to deserted homes near the old town. Only a few quarters are inhabited again, estimates speak of almost 10% of the old town and the adjacent neighborhoods.

The function of the mukhtar, a leader of the neighborhood, who knows all the inhabitants, is of extreme importance. He watches over the social connections in the district and acts as a guarantor to the authorities, according to their reputation. He represents the district to the outside and is at the same time responsible for the behavior of "his" residents. It is not without reason that attacks on mukhtars in Mosul and the surrounding area have been resuming for almost one and a half years. Mostly these can be attributed to ISIS sleeper cells. Where there is no control over population dynamics, ISIS cells can exploit this information vacuum and mingle with the population. The result is a spiral of violence from slow infiltration, attacks on local community representatives, reactions and attacks of the militias on civilians and increased resentment.

To break this vicious circle of lack of economic perspective, lack of political participation and repression by state organs on the one hand, and a resurgent ISIS militia on the other hand, would be in the sense of a reconciliation policy. Baghdad seems hesitant to capitalize on this momeentum so far, the fronts eem too hardened. Iran's influence over the economical, political and security interests of Iraq has grown steadily since 2014. A consolidation of the Hashd al-Sha'abi in the political fabric of Iraq has hitherto put into the distance a reintegration of the people of Mosul. A circumstance that the leading cadres of the Islamic State will carefully observe and use.

*designation for the inhabitants of Mosul

The defeated IS - is this really the end?

The Islamic State (IS) is defeated, that´s what you can read everywhere right now. With a lot of sacrifice, the people...

A small ultrasound unit can make a big difference

On April 10th, we were happy to present the Al-Khansaa children’s and women’s hospital at East Mosul with a donation...

70 years Geneva Convention - an anniversary with a smack

The Geneva Conventions celebrate 70th anniversary. Increasingly the four agreements, which can´t be overestimated in...

Berlin based relief organisation CADUS e.V. is supporting the construction of a field hospital in the al-Hawl refugee...

Good news for our projects in Rojava, Northern Syria. Funding for the medical care station in Raqqa was extended and our...

Henryk was in Iraq for CADUS last year. His engagement for the rebuild of medical structures isn't over after his return...