For our doctor Mike the end of an demanding medical transport. For R. just the beginning of his way to become healthy again. Foto: Artesans ResQ/Jonathan Vinke

For most of us war is something abstract, something that happens to other people far away from us. But the people in Ukraine are affected by the horribles of war everyday.
Our emergency doctor Mike tells a personal story about a ukrainian boy named R. who was injured from a rocket and who hopefully has the most horrible effects behind him.

It's July. The war has been waging for almost 5 months now, yet life goes on here in Ukraine. It's warm and sunny in Lviv, the schools are closed for summer break and the
7-year old R. and his mom are going to visit his grandparents in Vinnytsia for a week. That is around 8 hours by car away from home. His dad isn’t coming along because he
needs to work.

It is just another normal day on this 14th of July during a very unnormal period for this country. Yet, something will mark this day on the calendar with a dark tint, as this
country has felt so many days before already. Little R. and his mom are going shopping in the center of Vinnytsia. The air strike alarm goes off. Some go back home, some
don't. Even this has become part of everyday life. In most cases, the air strike alarm is automatically activated according to the direction and the speed of the rockets, resulting in a very wide and unspecific alarming of hundreds of square kilometers. So, reasonably, many people think 'what are the chances it hits me?'. After all, life has to go on. 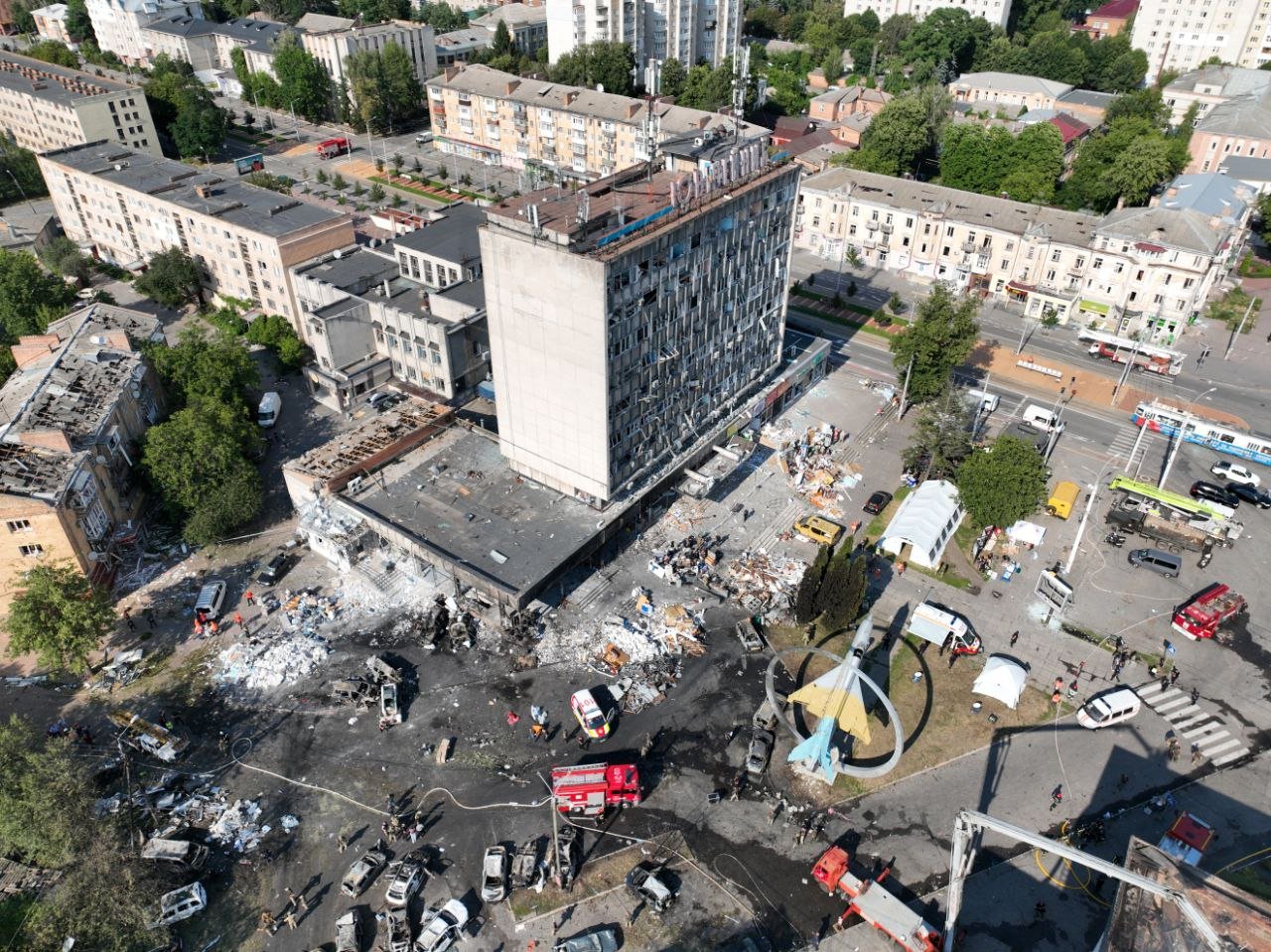 The aftermath of a violent rocket attack in the city center of Vinnytsia 14th July 2022. Foto: dsns.gov.ua.

Unfortunately for little R. and his mother, this time fate is not in their favor. The air strike alarm in Vinnytsia was accurate. Two missiles violently hit the city center.
28 people die on the site, among them little R.'s mom and three children. Over 200 people are injured. Little R. is rescued by the firefighters, still breathing and is brought to the hospital. His body is 70% burned and he needs intensive care treatment immediately.

Meanwhile in Lviv the father tries to find out what has happened to his son and wife and he is calling every number he can find in every hospital in Vinnytsia. But so is everybody else that had a loved one among the victims. It takes him 3 days to discover that his wife is dead and that his son lies in hospital in an extremely critical condition.

CADUS and other partner organizations are also there. We are trying to assist the coordination and evacuation of the victims to other hospitals since those in Vinnytsia have quickly reached the limit of their capacities. R. is lucky enough to get transported to the children's ICU (intensive care unit) in Lviv. The clinic there reaches out to our team and asks us to evacuate the little one to Germany since he is now additionally suffering from an acute respiratory distress syndrome because of the burns and a septic shock. 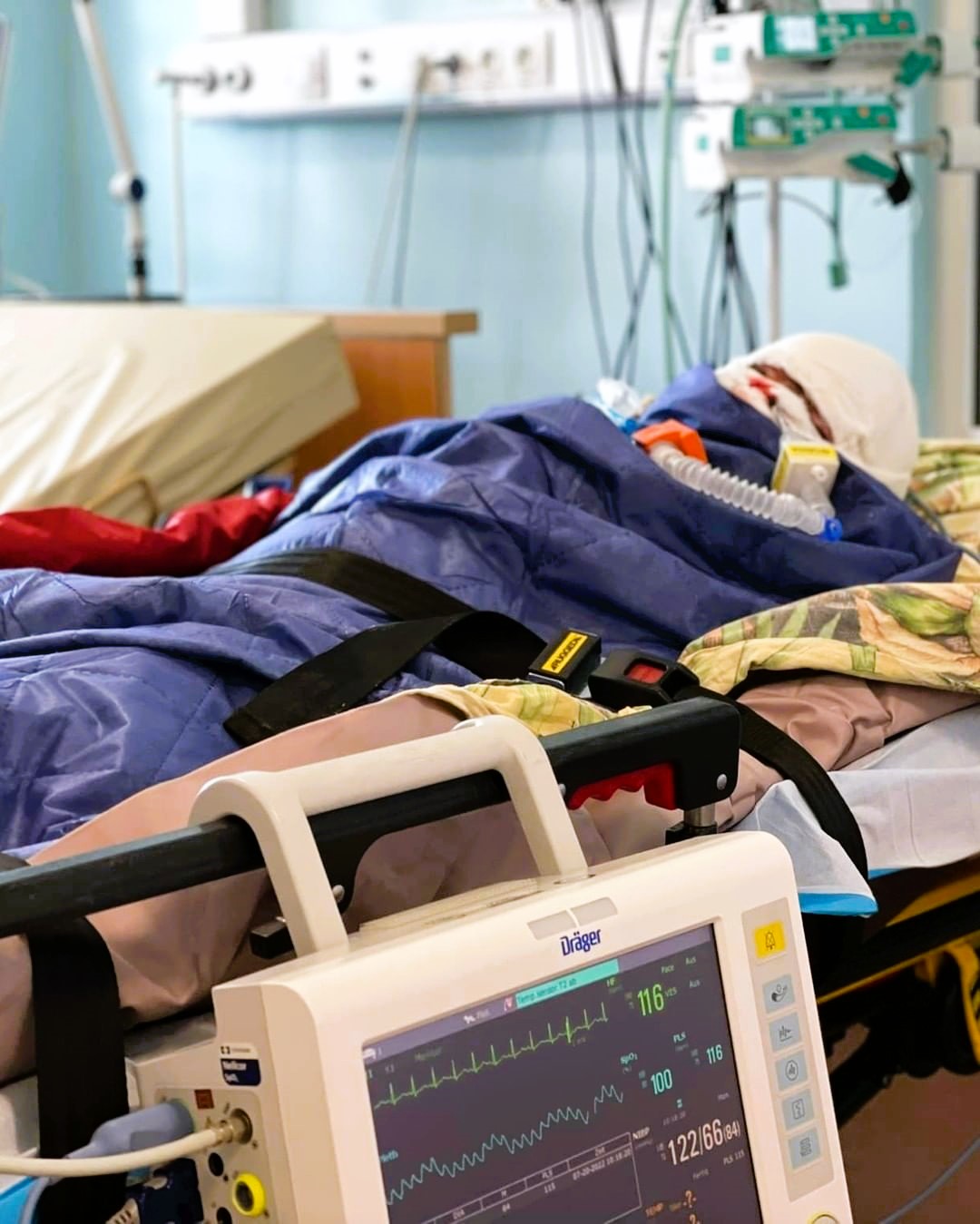 Our team creates a plan to help him: we communicate with a specialized children burn center in Dresden and get R. a bed in the ICU. We set an appointment with a specific
time and date with a flight ambulance in the airport of Rzeszow, Poland. We put together a team: an emergency doctor (myself) and two very experienced paramedics from the NGO Artesans ResQ (Jonathan and Maxim). We pay a visit to the little one the day before the transport and we plan everything to the last detail. There is no room for mistakes, as we know we are this little guy's last shot. And if I have learned something from my years practicing intensive care and emergency medicine is that one always needs to be prepared for the worst case scenario.

The day of the transport comes. The father is there. His gratitude is spelled widely across his tired face and teary eyes. After I see this tragic figure, I come to realize what
this person has been through in the last five days: from having experienced the war in his country from a 'safe' distance away from the front, he suddenly loses his wife, and
now his son's fate is in the hands of some foreigners he has never seen before. Yet, he is certain. He is calm. Contained. He faces with grace and noblesse something that
could otherwise be the nightmare of every father. Right there and then I am sure I will never forget his glance in my entire life. 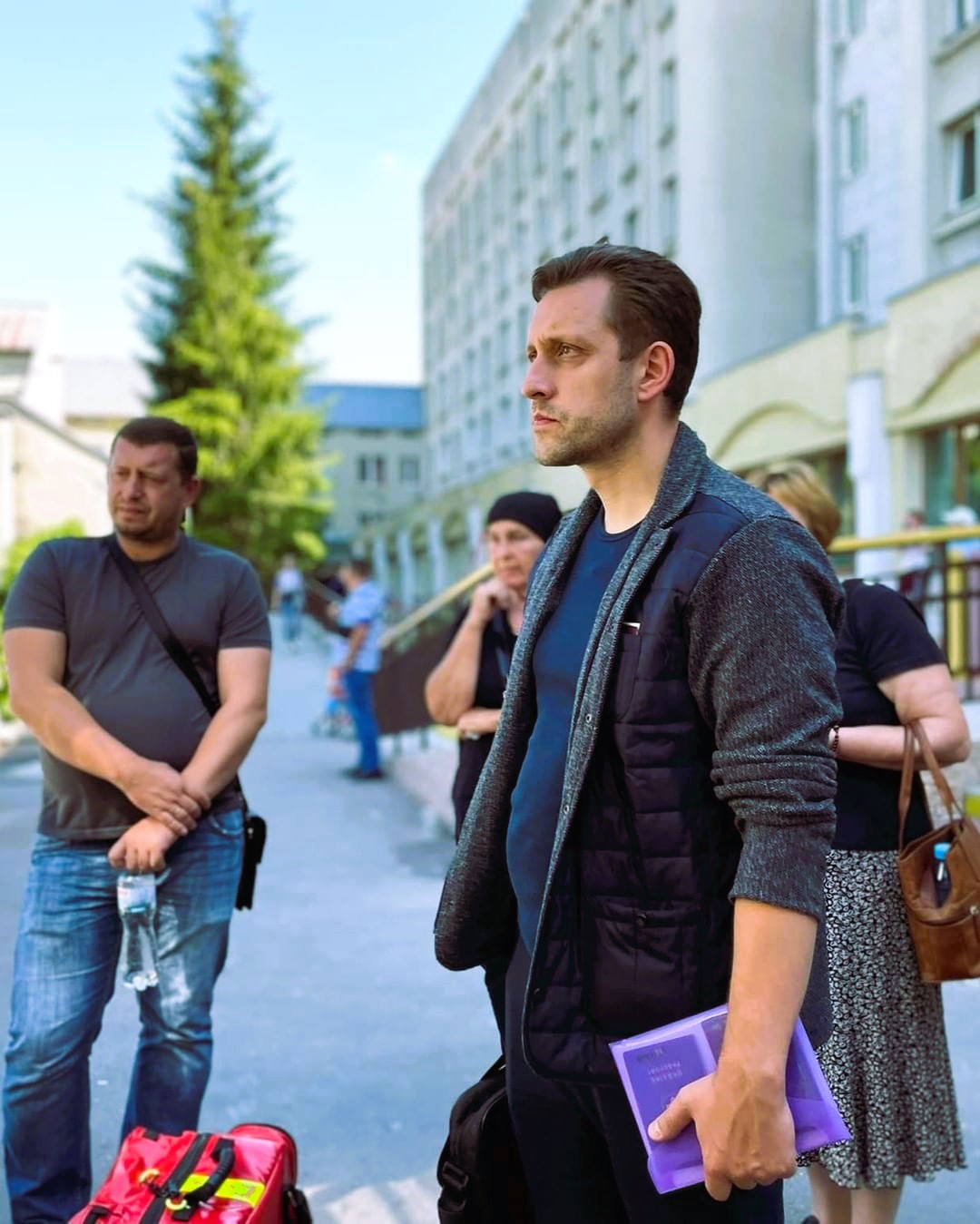 Last arrangements with all people involved before the transport. Foto: Unbroken Ukraine

It took us around two hours to get the patient into our ambulance, but we are still good with time. The engine roars, the siren screams and we set off westbound. Maxim is on the wheel and is speeding through the national road that will get us to the border crossing of Korczowa into Poland. Unfortunately, we realize that this border crossing is closed for maintenance for a couple of days, so we have to change our route and do a detour over the next one to the north. This adds at least half an hour of extra time. We are going to be a little late for our rendezvous with the learjet. That's alright, they can wait. As long as R. is doing well. And fortunately that is the case in the back of the ambulance. Jonathan is changing the four pump syringes like a talented juggler, I am adapting the ventilator and documenting little R.'s vital signs. 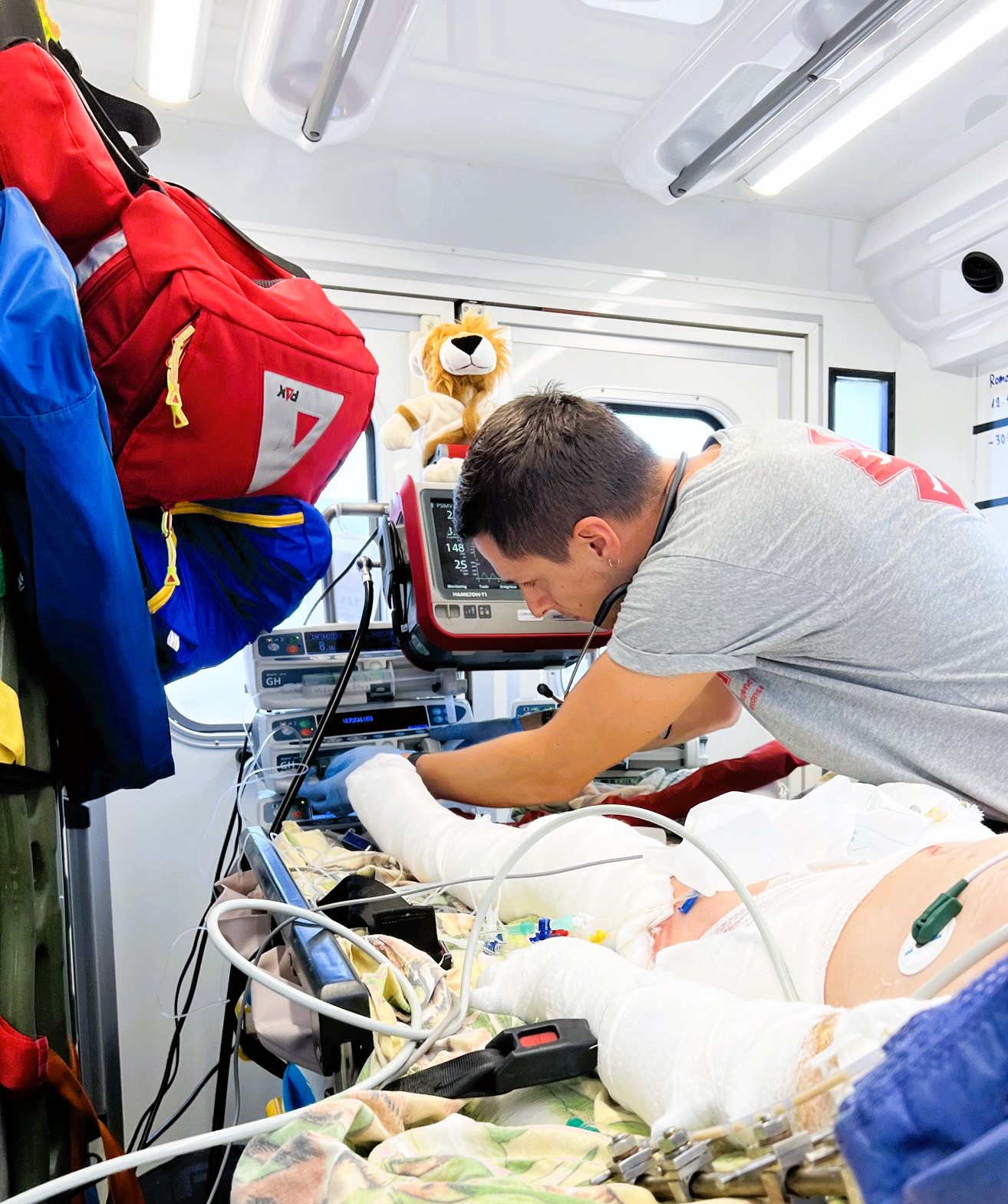 Around the time we are close to the borders, his blood pressure is starting to drop, his pulse is getting faster and weaker and his temperature is rising. We realize, this is not
going to be a walk in a park. Somehow all infants and children that we have evacuated so far, become increasingly unstable the moment we reach the borders, as if they are sensing they are leaving their home country. We start a volume resuscitation and we administer drugs to lower his fever. He is responding well. By the time we are approaching the airport, he is already back to his former vital signs and ourselves back to ours.

A special chaperone car is taking us to the Lear jet across the airstrip. The airborne evacuation team are there waiting for us eagerly. "We were starting to worry", says my colleague from the flight ambulance who is getting prepared for the handover. "Apologies, we decided to try another border crossing because we heard the nature is prettier there", I respond with a terrible sense of humor, adding the actual reason of our delay right after that. 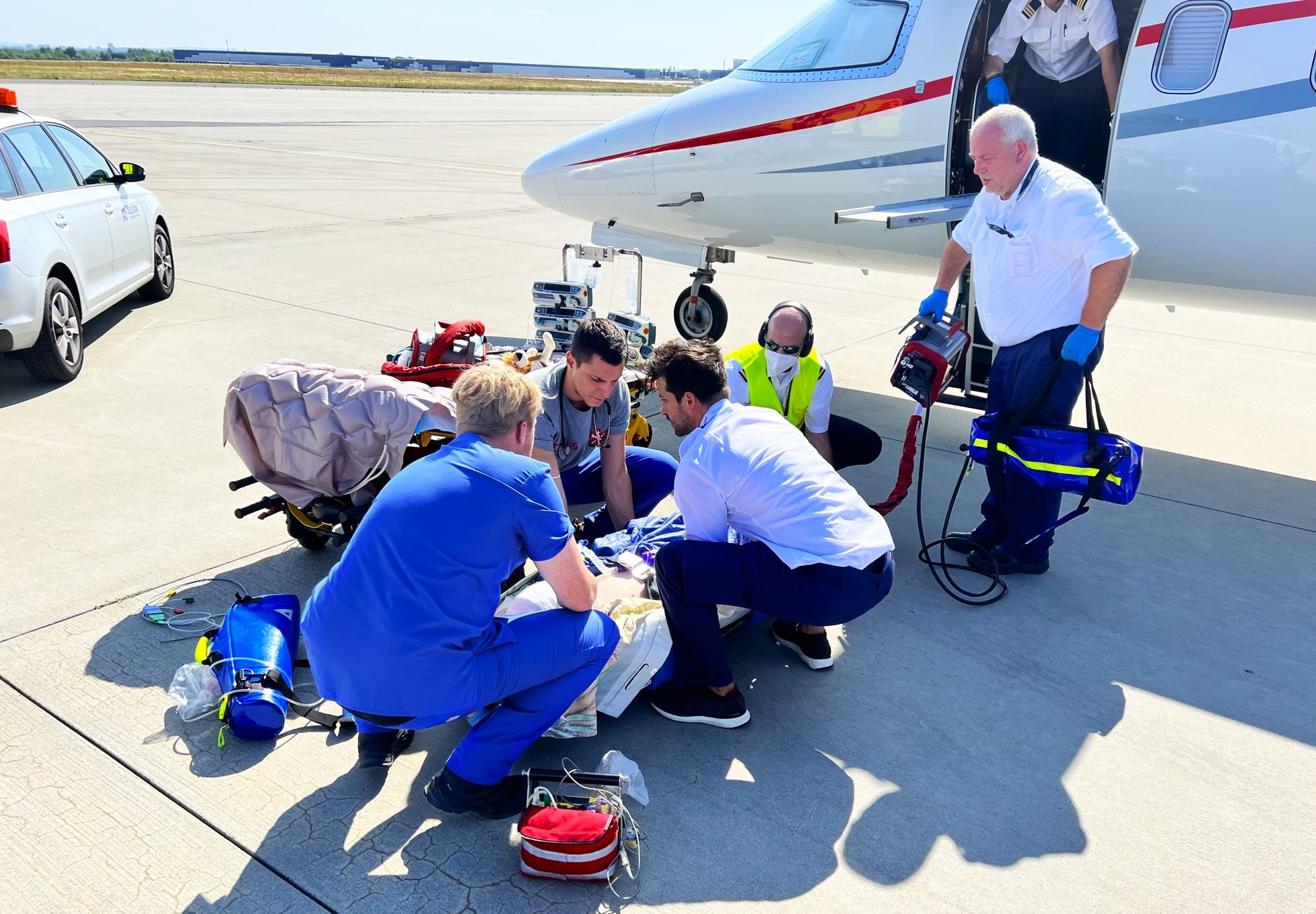 After a thorough but fast handover, we get the young patient with coordinated efficiency into the narrow flight ambulance. The father is there too, he rode in our ambulance next to Maxim. He has that same look, only now he is slightly more relieved. He knows that yet another part of the rescue chain was successful and now he has his eyes set on the next stage. I watch him, as he boards the narrow jet, too. When everyone is on board and before the take-off, the pilot gives us some cold Coca Colas from their fridge. This has been part of their ritual and I couldn't be more thankful, especially on this hot summer afternoon on the airstrip.

We board our ambulance again. Exhausted, relieved, whole. And hungry. Very hungry. The chaperone car escorts us out of the airstrip again and we are heading to the local Döner joint next to the airport. This is, in turn, part of our ritual.
In the background, the learjet takes off with the course set to Dresden. For us this signals the end, but for R. and his dad it's only the beginning of a long and winding road. And we are grateful and honored that we could help when we were needed.

If you want us to keep doing what we are doing, please support us in our cause by donating or by volunteering in our missions. After all, we are neither gods nor goddesses and have limited resources. We are only humans that help other humans who are in need. And this is exactly what solidarity is about.

Support CADUS with your donation!

At the CADUS Crisis Response Makerspace, where normally sawdust flies and welders flash, since two days there are many...