Bags are packed and bursting. There’s coffee and a windless 35°C, which we would come to think of as mellow. The department issuing entry visas for Mossul is closed over the weekend, but our “fixer and driver” found a way around it and so - together with our newest colleagues Kenny and Michael - we’re on our way to Mossul.

From checkpoint to checkpoint there’s more and more destruction. Incredibly, raging fights and reconstruction are happening almost simultaneously. When we arrived at the trauma stabilization point (TSP) we were lucky enough to catch a calm moment to get acquainted with the team and our new workplace. The first patients arriving at our TSP were victims of a chlorine gas attack. After providing first aid and stabilization measures, patients were sent to local hospitals. Not long after, four victims hit by a mortar attack and covered in shrapnel were brought to us. We faced unimaginable lacerations, burns and amputations. 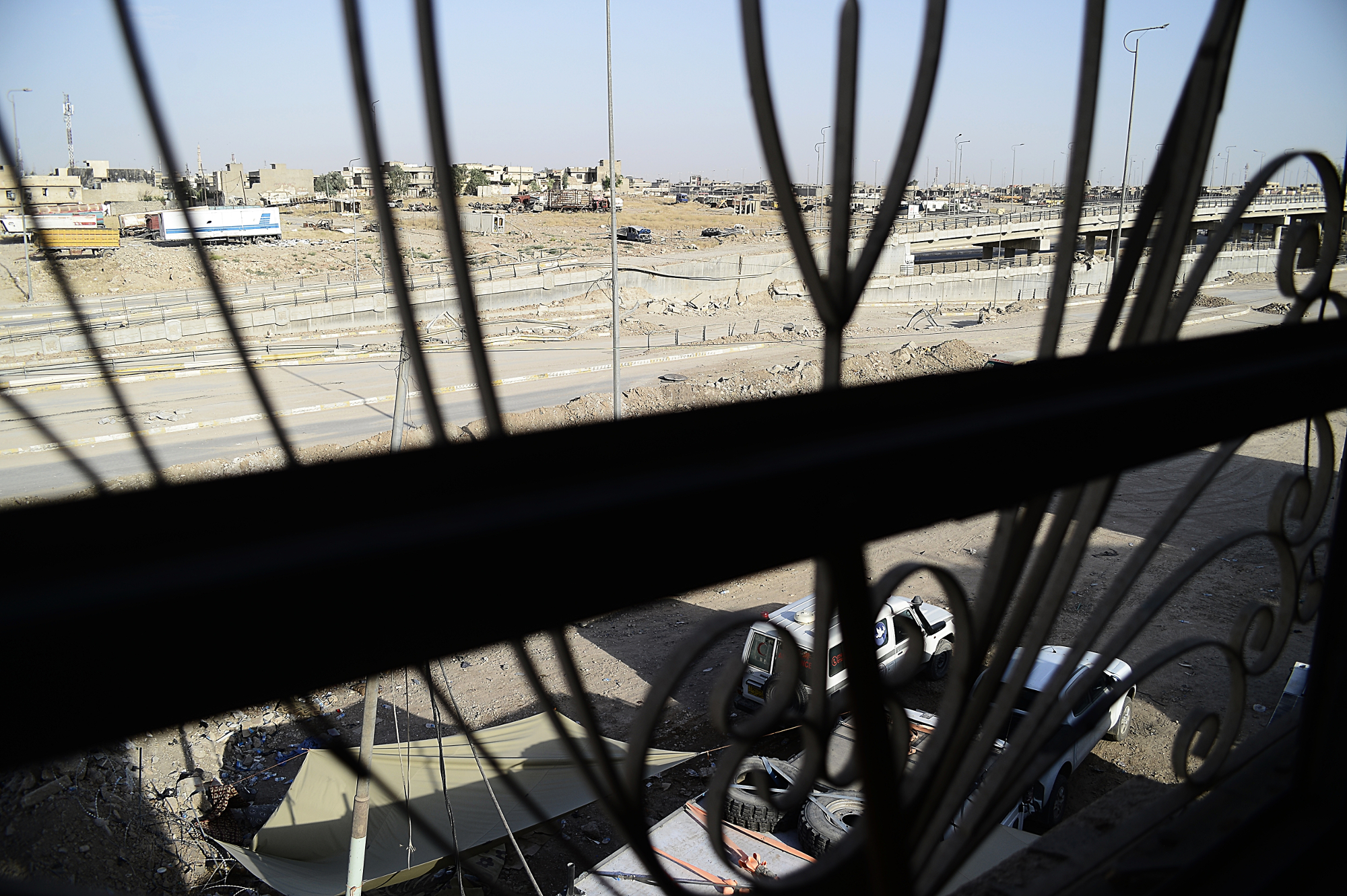 The view from our TSP on the destroyed city of Mosul. Photo: Kenny Karpov

War rears its ugly head
That night, our translator “Tiger” wakes me up, telling me a soldier showed up in our TSP. The others are sleeping, so I decide to get an overview together with Tiger. As it turned out, he fell from a roof but was otherwise stable. Tiger and I fixed him up and sent him to a hospital. Then, listening to music, I try to put myself to sleep again.

The next day, the Iraqi military launched a major offensive and our TSP was swamped with patients. Every hour new victims arrived, and on top of it, we were faced with infrastructural issues at our camp like flooding, a dysfunctional internet connection and a broken fridge, stripping us of cold drinks, which had been a small but essential boost to our morale.

While the internet and fridge could be fixed, we shouldn’t be so lucky on the medical front. We provided for two waves of people with major injuries, amongst them many adolescents and children. Despite our best efforts, we lost two children to their injuries, which was immensely hard on me. 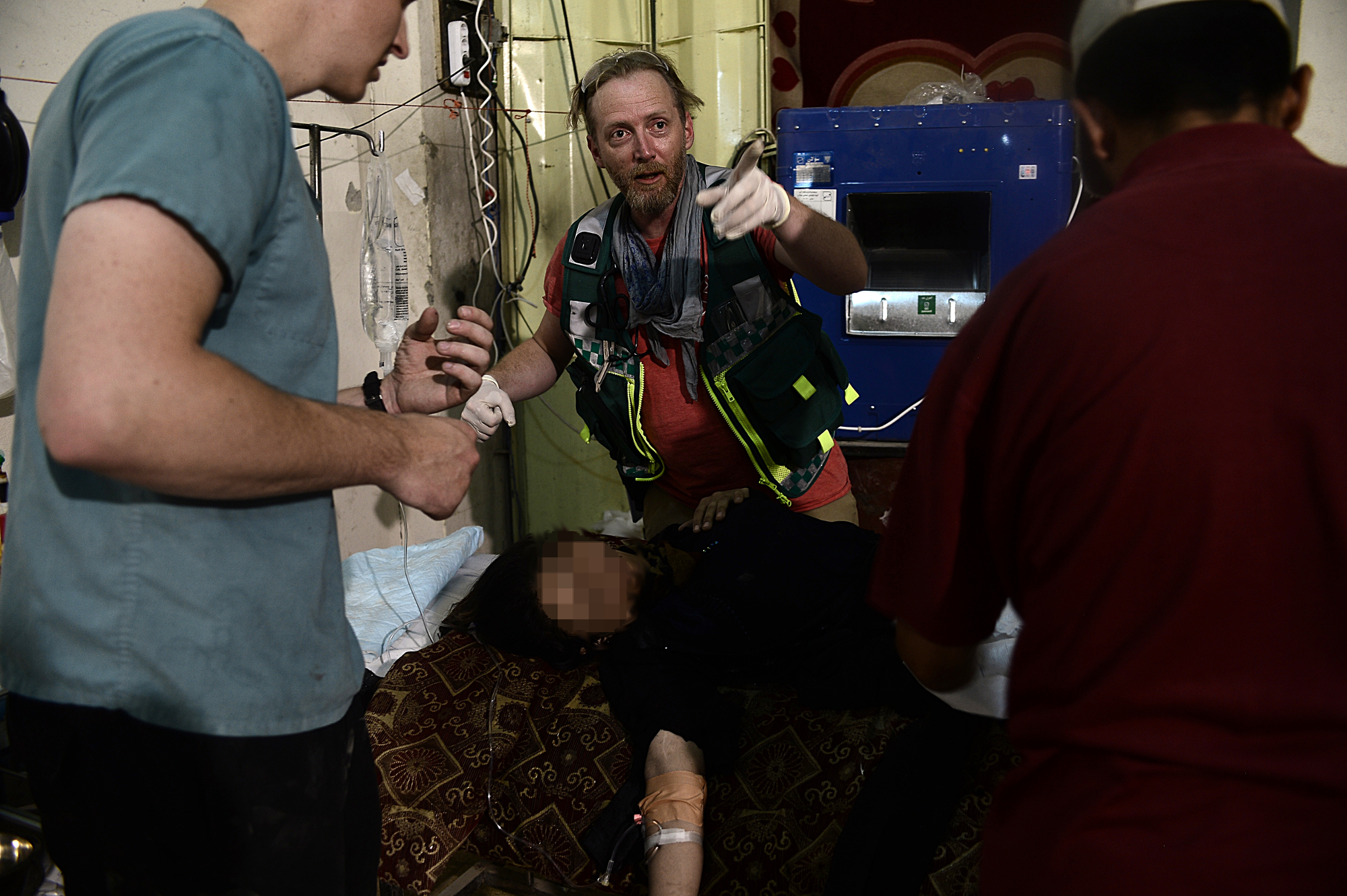 Malte in the middle of the treatment of an injured woman. Photo: Kenny Karpov

At this point, the cruelty of war became apparent to me in full force. It was not some kind of natural disaster creating those injuries, but people committing these atrocities on other people. This day, we noted a lot more civilians among the victims than in the previous days. We were facing the massive machinery of war with our minimal equipment. And like every day we heard that all will be over in three days. Considering what we were seeing daily, thisline turned into a bad cynical joke.

We received a firm reminder to keep your safety equipment at hand, when there was an incident involving a drone right outside our camp: Shots were fired and people were yelling in Arabic, which we couldn’t understand. We considered taking the evacuation route away from the camp, but decided to wait and see for just a bit longer. Again, shots were fired. Then silence - we were safe.

As it turned out, the Iraqi military tried to shoot down a drone. None of the soldiers seemed worried, instead rather amused about their little “shoot down the drone” game, seeing that soothed us. 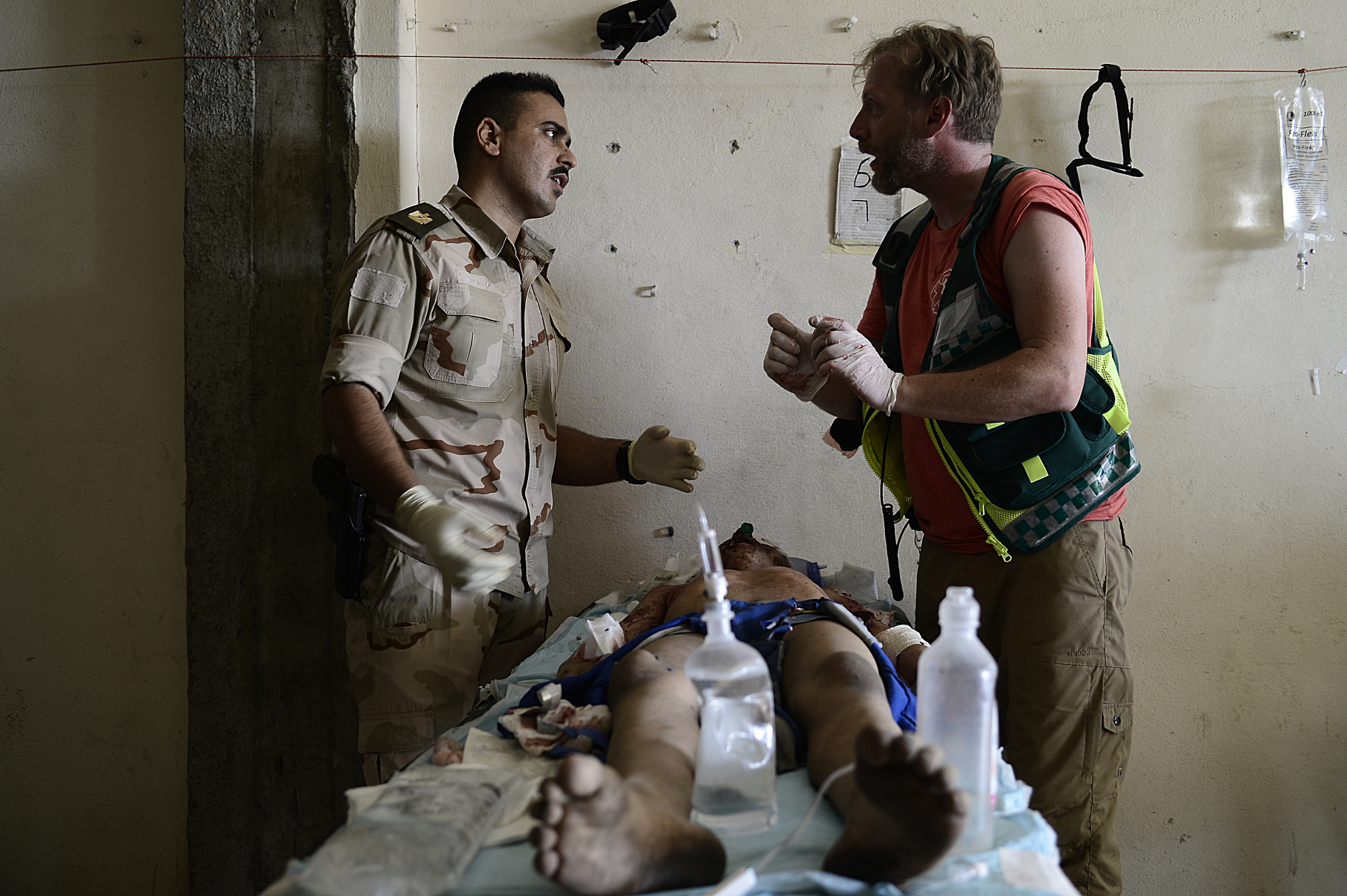 Discussion with the Major of the iraqi army. Photo: Kenny Karpov

Reading the reports of the paramedic teams before us, we noticed that the previous weeks must have been more tumultuous. The following days, however, were rather quiet, giving us a moment of rest, and sparking an inch of hope within us that we may, after all, have reached the final days of war.

Now when civilians come to our TSP, it’s mostly women and children from downtown reaching us by foot, in many cases having walked for two days. Mixed in with the heavily wounded soldiers and civilians we increasingly treat patients who are severely dehydrated and malnourished. This led us to consider establishing a “mini TSP” closer to the city and the front lines. 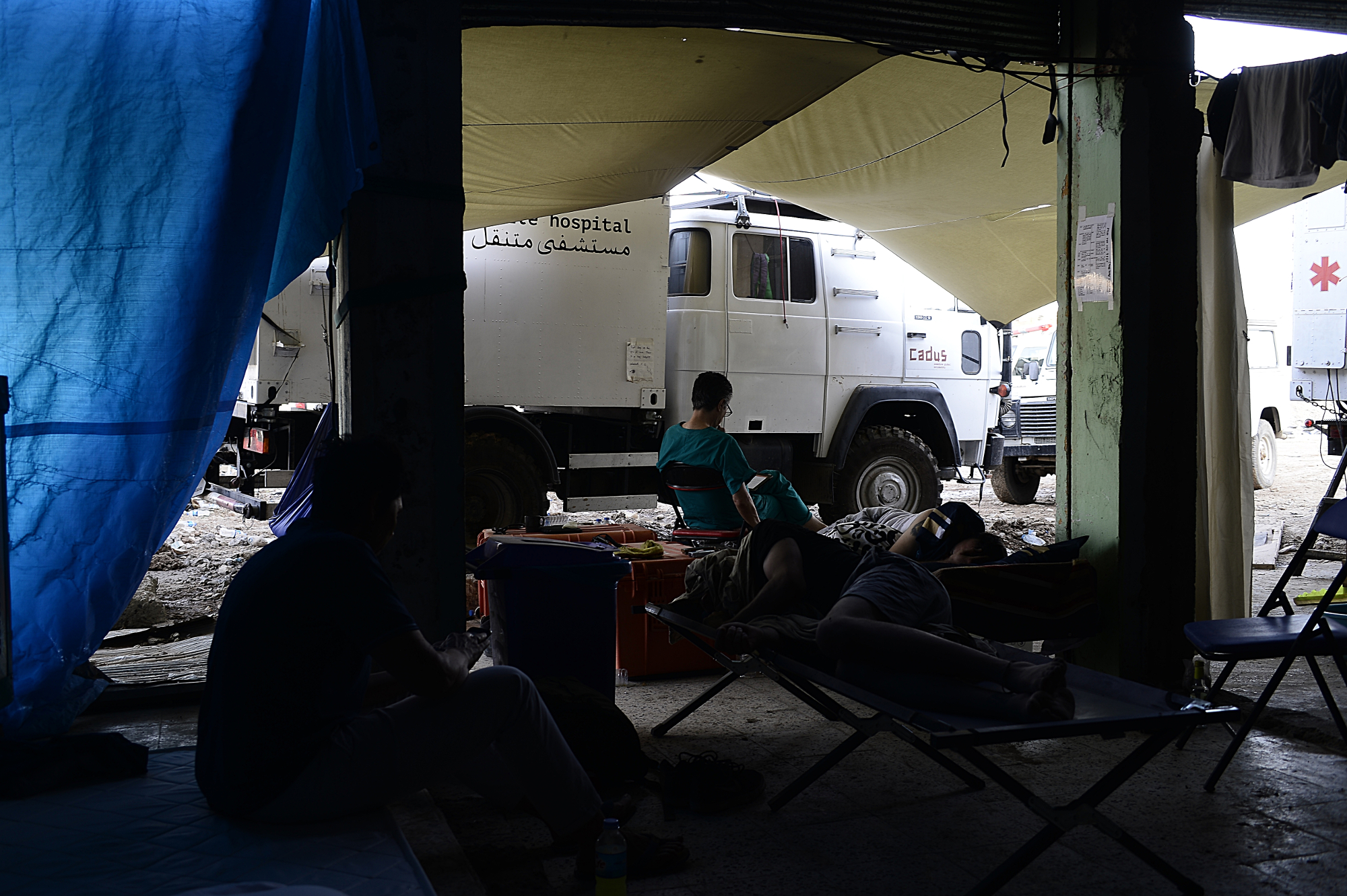 If there is some free time the team tries to relax and get some power for the next actions. Photo: Kenny Karpov

A nice day in Mossul is a day where everyone sits together in the morning and enjoys their coffee without any injured. Going back and forth between the calm togetherness with the team and the sheer horror of war in the form of severely injured people, you lose your sense of time. Out in the dust, one day can feel like a whole week. Constantly, we’re faced with the low level of supply of the army, which strains us in addition to all the rest. The whole setting takes place in 50°C where drinking of water is not to be neglected.

No end in sight.

Everyday anew we hear the operation will end today. Nonetheless, every day is tougher when you set out thinking it will be. Mildly wounded children brighten our days with their smiles and happiness over a cookie. Though it does quiet down a bit, there is no end in sight. We see more and more dehydrated and malnourished women and children as well as civilians, heavily injured from secondary damage following bombing. Losing a boy who’s been brought in with his family devastates me. Despite all our efforts, he dies during intake at the hospital. Only shortly before, his father had thanked me for saving his only son. It broke my heart. For the first time, I couldn’t function for several hours.

I wouldn’t be able to take stock of the past eight days. The team grew close and the way home feels weird. On our way to Erbil, we see the stark contrast between destroyed western Mossul and the intact and bustling eastern part of the city. I’m deep in thoughts, with the nagging question of how people can do such horrible things to other people in my head all the way back to Germany, into my own bed. Would I do it again? Despite much brooding, the answer is yes. 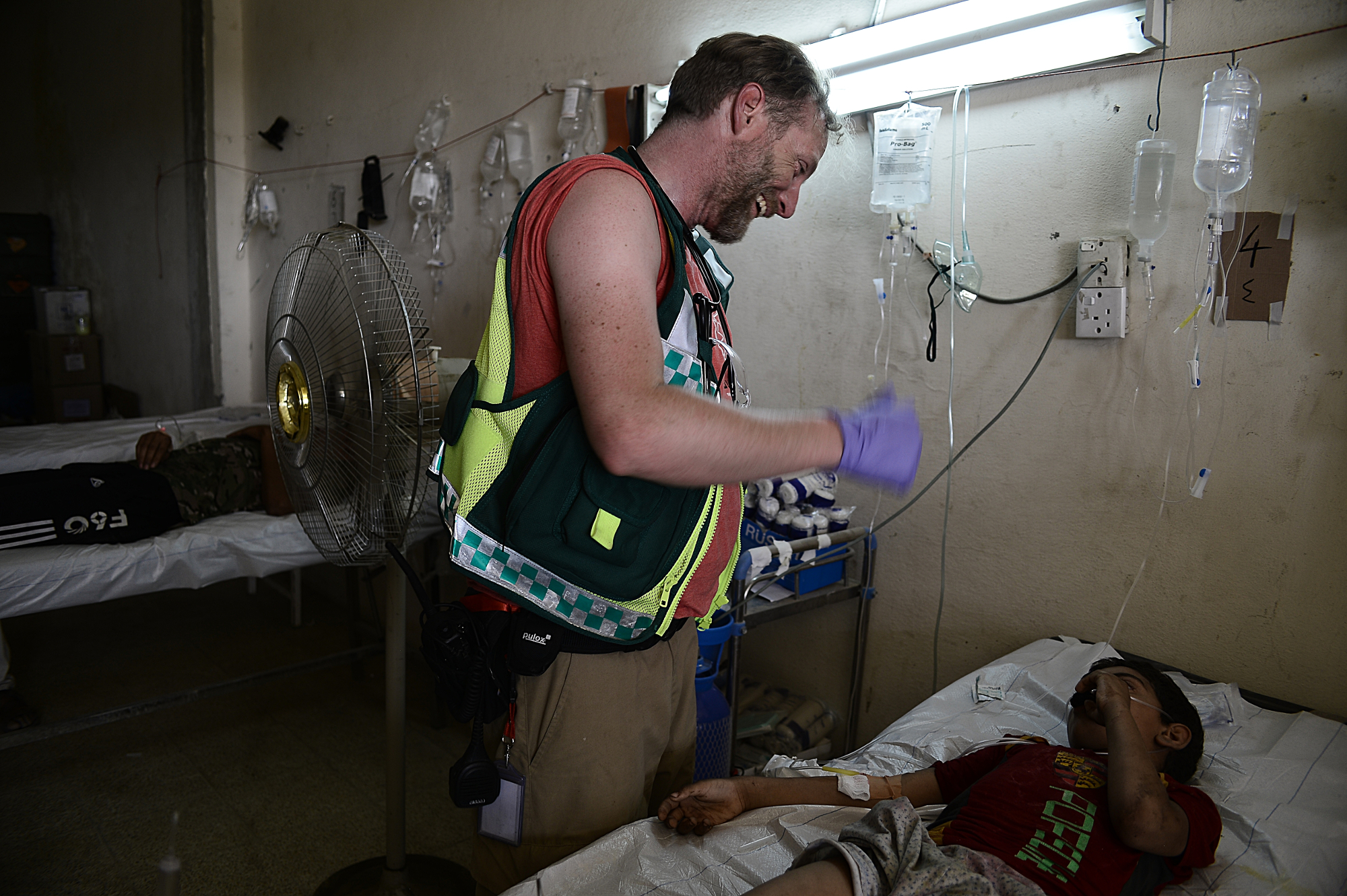 Despite all the negative impressions that come with working in a warzone, it is a good feeling to help the people. Photo: Kenny Karpov

Support us with your donation!