The situation in Mosul is still dramatic. Sebastian launches an urgent report from our Trauma Stabilisation Point (TSP) located in this disputed city in Iraq.

“The last days were incredibly exhausting for the whole team. The influx of patients continues unabated. I'm almost surprised about this, 'cause the number of patients is much higher than another TSP has told us in advance. Daily, far more than 30 seriously injured people, civilians and combatants arrive here. Often the awaited help is too late, they're practically dying while arriving. Especially the people captured in IS controlled areas, who were suffering from hunger and currently not having access to water, they're no longer providing resources to survive severe injuries.

The team is particularly affected hard by the loss of children. Yesterday there was a small boy, who set off an improvised IS booby trap whilst with his brother. About more than half an hour his brother was reaching out for help till he got to the TSP. But until then, the small boy had already lost so much blood, that all of our efforts had been in vain, even attempts to resuscitate didn't work and today, followed by the situation of a small girl, whose house was hit by anti-IS-coalition. Her lungs were so badly damaged by the explosion, that yet again, our help remained unsuccessful. 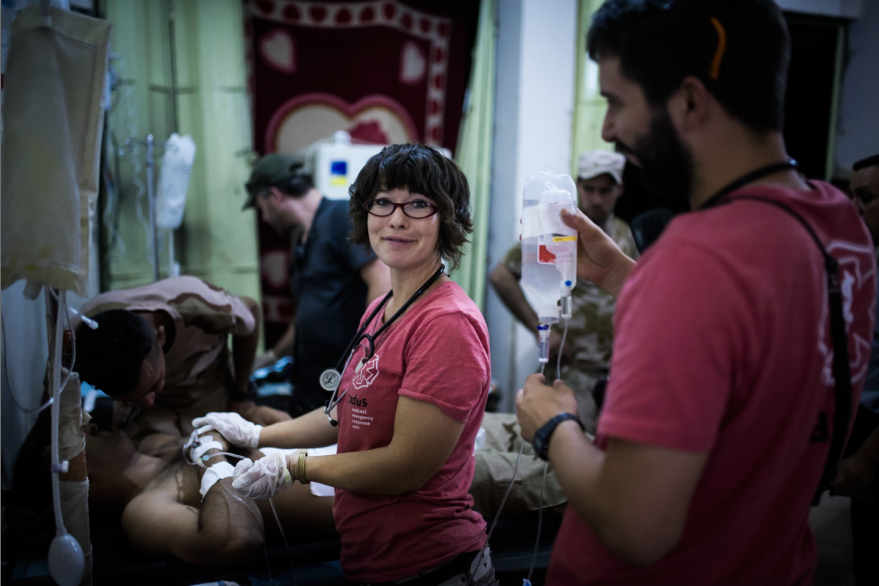 Despite all the difficulties and setbacks our team is not discouraged and gives everything to provide the injured. Photo: CADUS

No one likes to show how deeply you get affected by this, the next patient is already waiting, the next vehicle arrives, bringing more injured, there’s no time to feel. During breaks, if there's no need for medical treatments, when there's time to tidy up and re-fill consumables - you can see the past days, it's all written on all our faces. So we agreed, if circumstances permit, at least trying to hold short debriefings in the most severe cases. 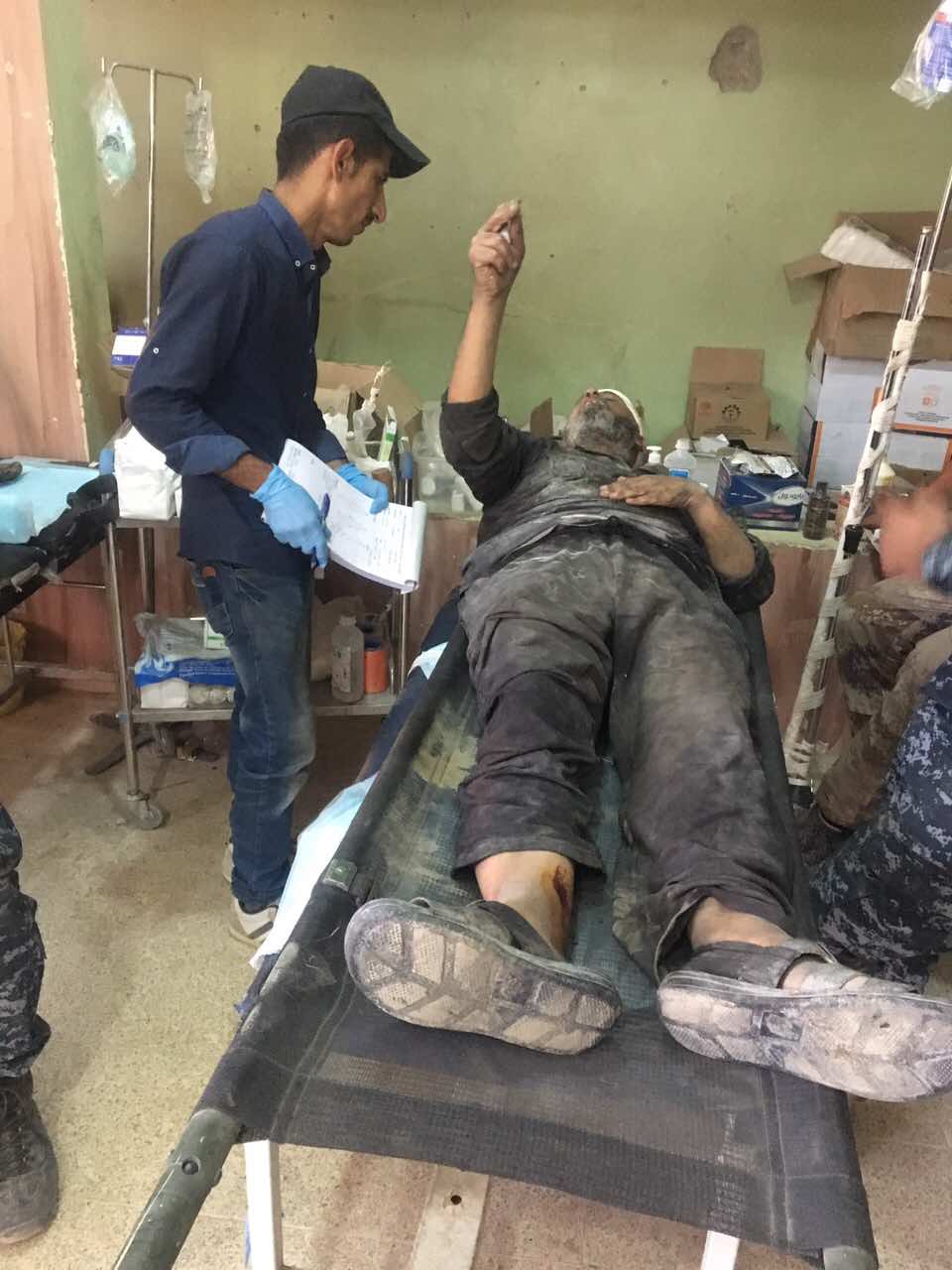 Another patient is medically treated in our TSP. Photo: CADUS

Early afternoon, military arrives, asking us if two medics could join them, there would be lots of Injured where we’re going. I attend a short briefing then head off, equipped with one of our mass casualty kits. Despite their background we give troops and civilians the same priority, all life is treated the same with the TSP teams.

On the way to the front, bigger oncoming groups of refugees appear. They come from parts of the city, that were liberated today by iraqi troops. They look emaciated, undernourished, worn out. Eyes haunted, everybody's carrying as much of their lives as they can.

On location, it's less dramatic than expected. Almost only civilians waiting. For this time, our sorrows were unfounded. Nobody is newly injured, but all wearing traces from last days bombings. Everybody who had been able to walk was sent by foot. Here you'll just find those who were too weak or too injured to make it on their own.

About two blocks away, they're intensely fighting, so we hurry up with loading. An elderly woman stoically staring into space grabs my attention. Upon closer inspection I recognise that under the red scarf covering her shoulders, she's hiding an open and untreated compound fracture of her humerus, her upper arm is broken and piercing through skin. On request, she tells me that it happened two days ago. It's unbelievable to see what these people are going through. 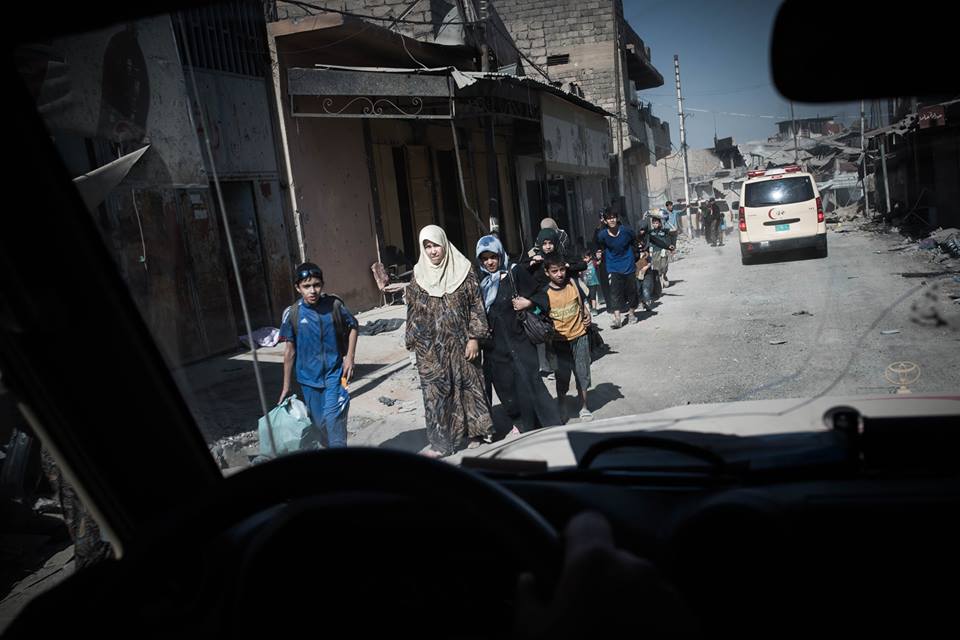 Everybody who is able to go flees from the battles in the old town.Photo: CADUS

I head on to get some oxygen and discuss some issues at the nearby TSP . It's empty, the international NGO has left. The next one is also abandoned (there are only three more in Mosul, not including ours). The military is telling me that the NGO was send back to Erbil.  Shortly before trying to get to the third TSP, I receive a call and message from UN-OCHA (United Nations Office for the Coordination of Humanitarian Affairs) and WHO (World Health Organization) in Erbil. It says that the TSP moved, but nobody knows to where. A mortar shell exploded half a kilometre away from Mosul General Hospital, and because of that ICRC evacuated all its staff. The MSF station France remains closed, reopening shouldn't be expected this week- they've adapted the emergency safety protocol.

Awareness of reality goes so far that for some it's too calm to stay, for others too chaotic to even fathom. Although for us the closure means only one thing: more patients. Mosul General Hospital running at half capacity after a nearby bombing, 2 TSP's broke off, one moved to an unknown address. We’re the last TSP standing, we prepare for an unpleasant night

By now, we're the only TSP in Mosul. These people need our help and we need your support for fixing costs and care for the victims of war.

Donate now for our TSP!