As things progress in Mosul we’ve had to replace most of our team in the area. Our surgeon Axel is replaced now by Elisa and we have Stefan and Marino as doctors at our Trauma Stabilization Point (TSP). All three are supported further by paramedics and nurses.
Our three new team members were in at the deep end from the get-go with the IS military situation in the old town growing more and more disastrous. Suicide attacks on populated areas of Mosul and sleeper cells being activated in other free parts of the city. Our team continued their work despite the barrage of recent destruction and bloodshed, earning our deep thanks and respect.
Here the first report by Elisa and Stefan: 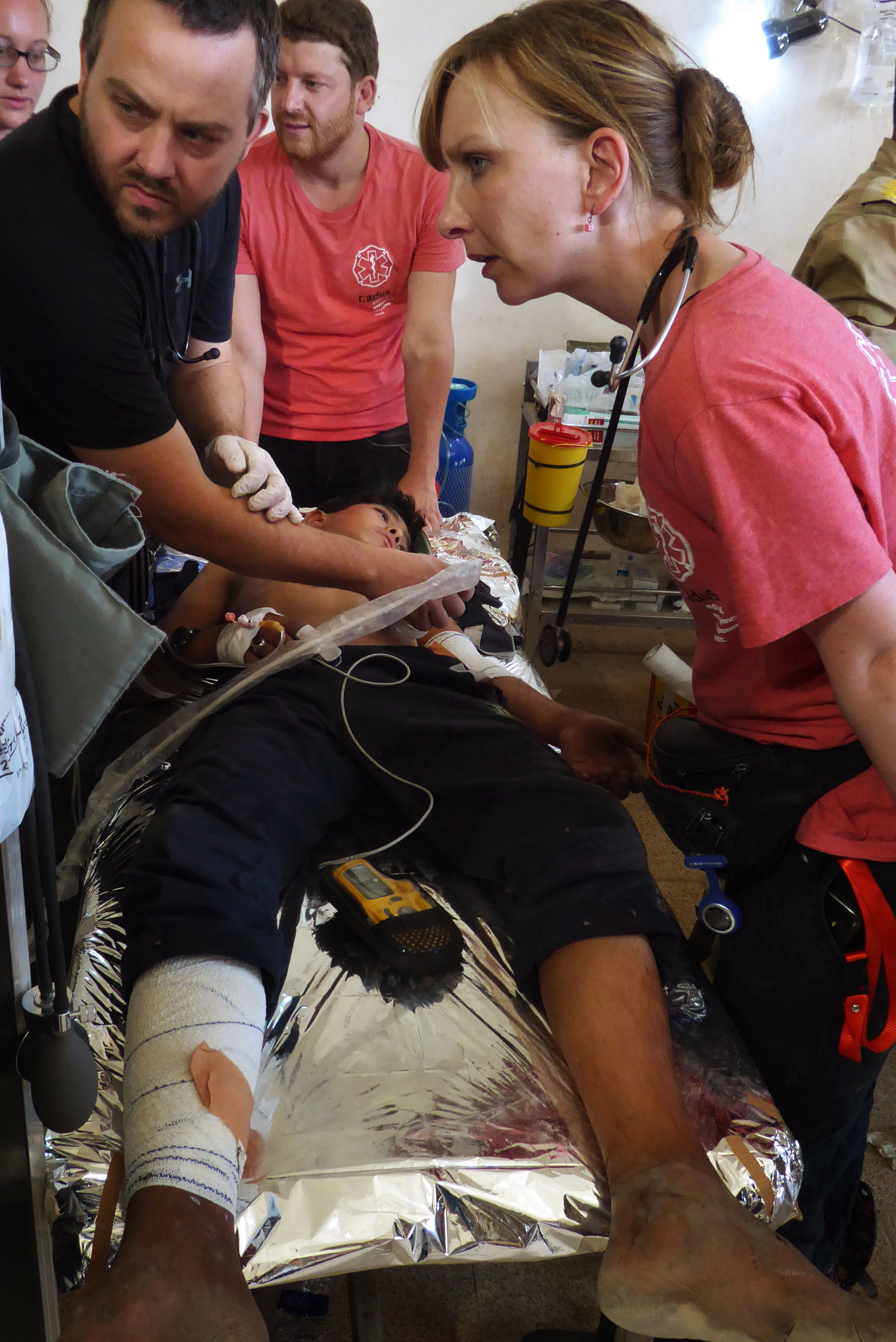 "The first day at the TSP was characterised by incidents in the old town. IS military began with suicide attacks on the market where dozens of civilians and soldiers were killed. It was hours before the first injured were admitted to our team and we later learned that IS had instructed their snipers to shoot and throw grenades at injured survivors of suicide attacks as well as volunteers who went to aid them.
Several soldiers who were brought to us did not survive the journey and were already dead. Those who did arrive alive were stabilised and given initial treatment so that ambulances could take them to the surrounding hospitals, we barely saw any injured civilians, indicating most had died. 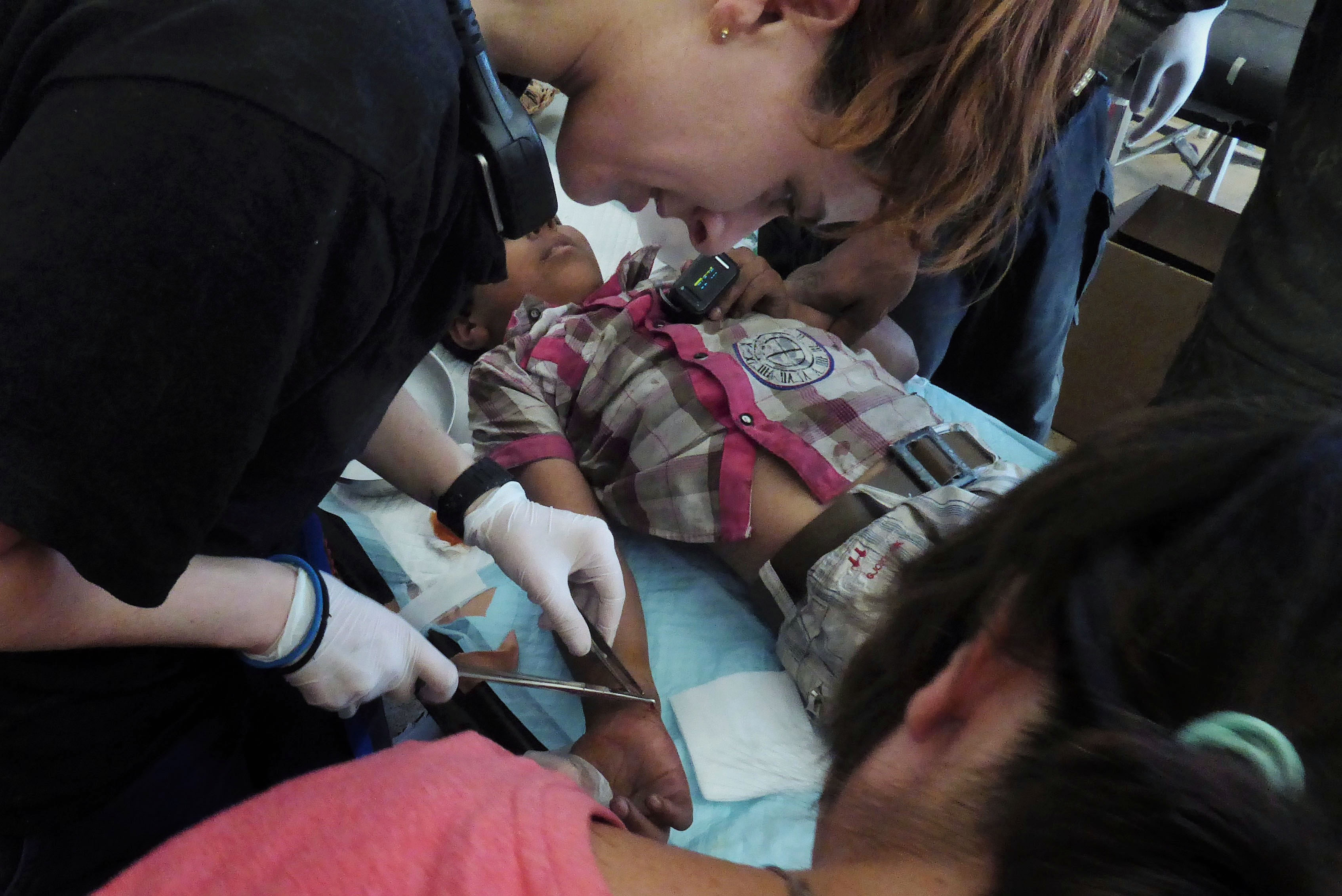 Kristy sews a wound on a wrist. Foto: CADUS 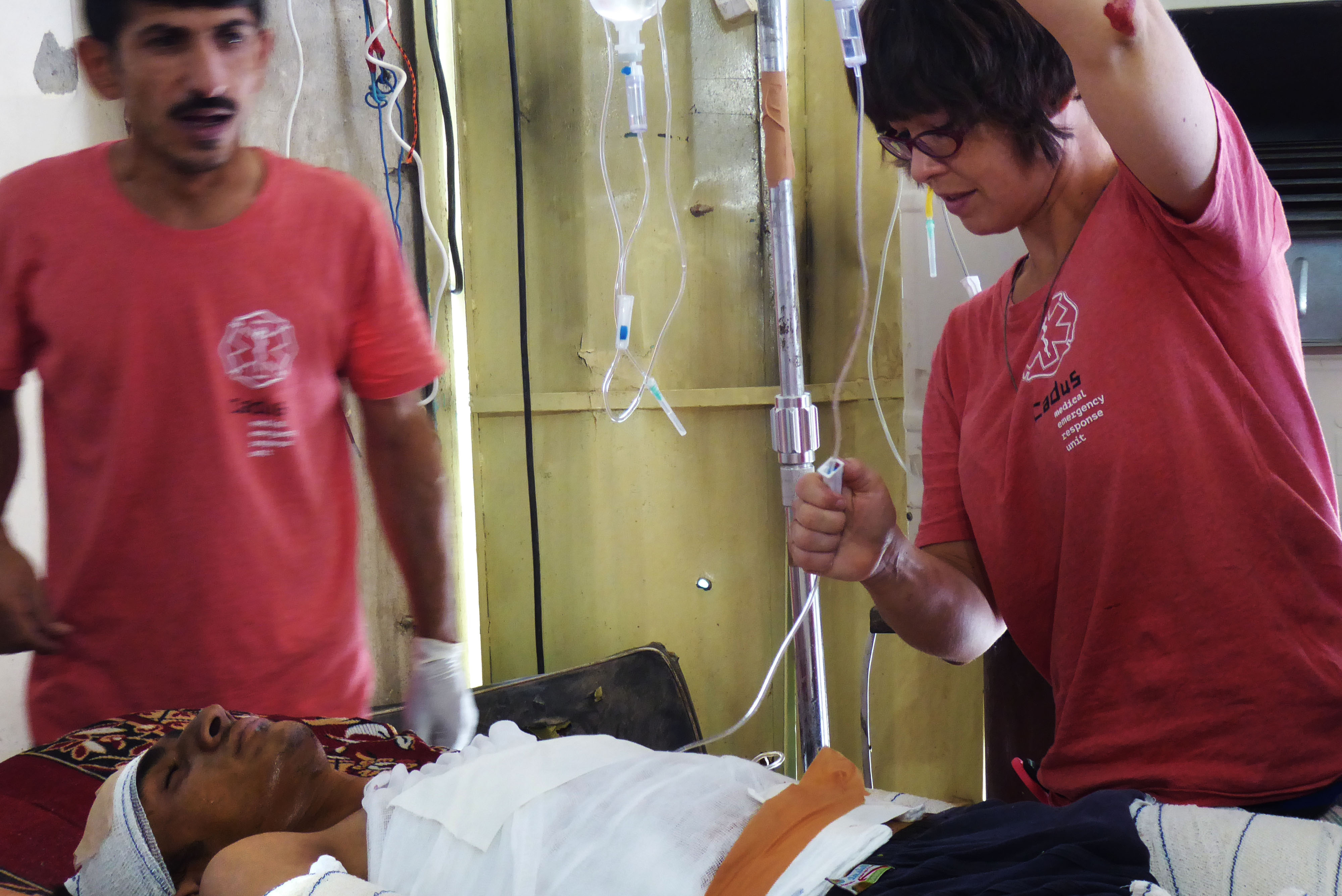 A patient gets an infusion from April, translator Tiger is assisting. Foto: CADUS

The night set in with gunfire, explosions and clouds of smoke above the freed parts of the city directly behind the TSP. After initial alert we were informed that 10 to 15 IS fighters, suspected sleepers, were attacking already freed districts in Mosul. The first assumed suicide attacks by single individuals turned out to be an offensive by IS, within the surrounding districts Al-Tanak, A-Risalah and Al-Yarmouk which, having previously been freed, now found themselves under attack again.
We later heard a further three districts in Western Mosul, which had also previously been freed, were also under attack again. These attacks were followed by a counterstrike by the Iraqi Army and supported by the US Airforce. The entire night we heard a constant stream of gunfire, exploding bombs and grenade attacks from the TSP.
Approximately 20 to 30 injured people brought to us were treated and then either released or relocated and we received the news that the MSF (Doctors Without Borders) hospital was forced to close due to battle taking place in the surrounding area. 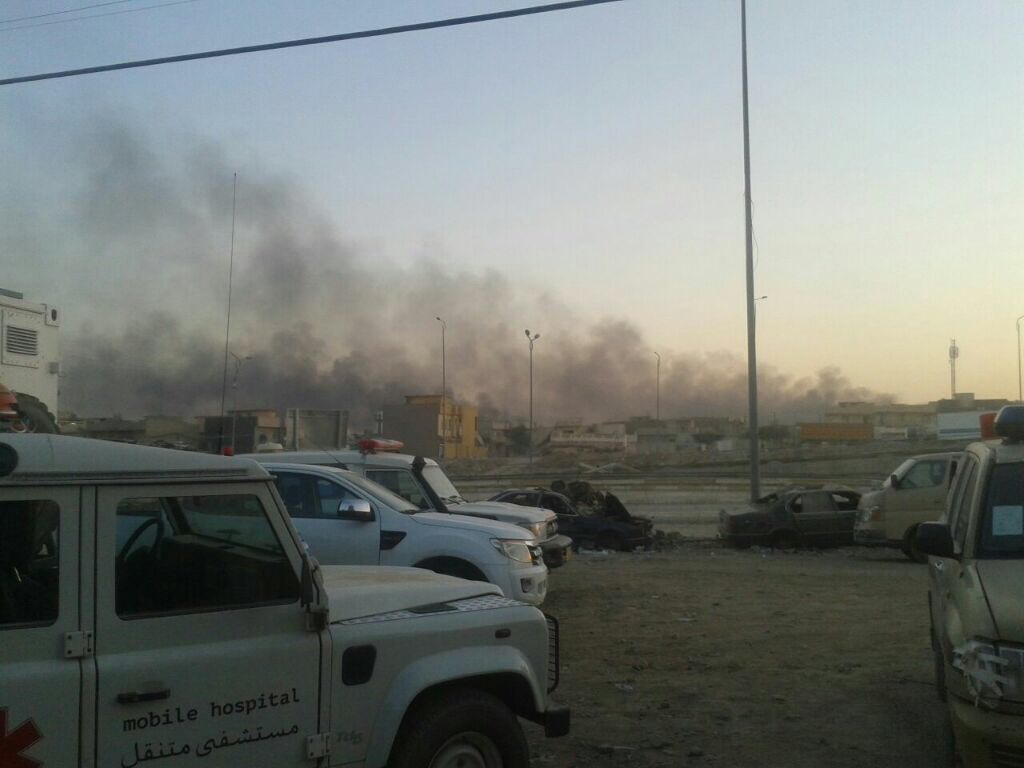 Dense smoke rises above the attacked parts of the city, very close to our TSP. Foto: CADUS

The civilians who escaped from occupied areas arrived at our TSP, many of them injured from being buried by falling ruins and trapped for a long time with no access to food, water or medication. Among them was a heavily pregnant woman who reached us already in labour. We prepared for the new arrival and despite it being a challenge to support a birth next to the treatment of severely injured people we were happy to witness the fact that despite all the death and destruction life continues. The pregnant woman herself and her mother in law were calm and were even able to joke with us amongst the chaos. At dawn, when the streets were released to civilians again, they decided to drive to the hospital. The rest of the night we tried to find some sleep, despite the unfamiliar and intense background noise and the interruptions of treating newly arriving patients. The heat plays its contribution to further sleeplessness as well as the worry that we need more and more money for supplies every day to cope with the ongoing turmoil in Mosul.”

Support us with your donation!